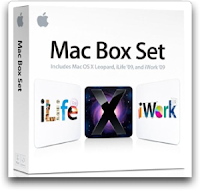 UPDATE: Looking for a guide to iWork for the iPad? Click here.
If you are thinking of buying a Mac for Christmas you might want to wait out for another month as January is the typical release month of the updates to the iLife and iWork suite 2010 and you don't get a free upgrade even if you've just bought a Mac the day before the release.

iWork
This is Apple's in-house equivalent to Microsoft Office with apps that, frankly, still aren't up to scratch when compared to Office.
Pages 2010 - Increased compatibility, maybe to work with Office 2010.
Keynote 2010 - More templates are likely to be added and maybe new transitions
Numbers 2010 - Sample templates are also likely to be added here and more chart types.

What is really needed is a Publisher replacement on a MaC. This could be done really well by Apple and could actually be a better product than Publisher itself. In 2008 Numbers was added to iWork, so a new program may be added to the suite later - and 2010 would be a good year considering last year's updates were rather, well, boring.

The suite already went through major upgrades last year and it may not even get an update this year - if it does and Blu-ray support is added then this is a very strong sign that Blu-ray will be coming to the Mac.

UPDATE: Looking for a guide to iWork for the iPad? Click here.