- November 06, 2009
Today I was shocked to be greeted by a 15-second ad spot pre-roll before a YouTube video from college humor. The video I was looking at was http://www.youtube.com/watch?v=Xgls9IwWUyU&feature=fvw in case you wish to try this.

This was surprising for me as I expect to see text ads on YouTube but it does make absolute, perfect sense that this is happening. YouTube was spending $1million a day on bandwidth in March 2008 and now has more than 20 hours of content uploaded every 60 seconds. YouTube has to pay for it's colossal bandwidth bill and now is the right time to do this. The 15-second ad from Sony was actually not that bad as 15 second really is not that long though this may prove troublesome for users who already have limited bandwidth and download limits.

After some additional views on CollegeHumor's channel I managed to get some screenshots of a longer 20-second pre-roll for Call of Duty: Modern Warfare 2. 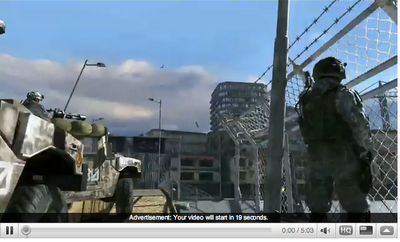 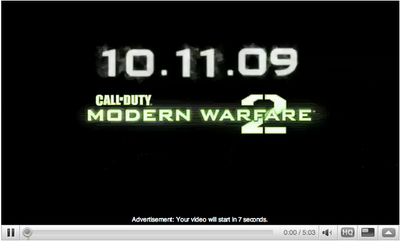 Towards the bottom of the player there is a message which says "Advertisement" so it is very obvious that you are watching an advert which is important. It also has a countdown displaying how many seconds are remaining.

It also remains to be seen whether it is CollegeHumor that allows these videos or whether it is only being trialled with some videos or some channels. What is certain is that we will be seeing many more of these videos as more and more advertising changes to online video.
ads adverts pre-roll tech announcement tech comment video youtube