- January 13, 2010
Whether you think it's called the iSlate or the Apple Tablet, it's an almost certainty that by the end of the month we will have a Tablet to be drooling. Whether we actually need it, is a different story but we're sure Steve Jobs will be able to persuade us that it's the best thing since the iPhone.

What might be coming that is not a tablet?
An iPhone announcement will surely come - either OS 4.0 or a new iPhone with an improved camera and screen.
An Apple TV update - with the 40GB model removed a few months back and an OS update late last year Apple hasn't forgot about it's "enthusiast" product. Maybe a new box? We could do with some PVR functions...

Back to the tablet then... 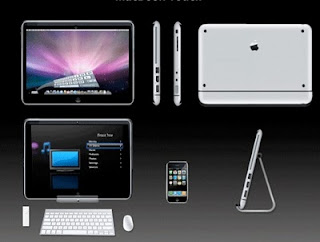 I have just found the image to the left of someone's concept for what the device could be. I have got to say that this would be the perfect kind of device as a tablet probably isn't going to be enough. It needs to come with a stand and be able to essentially acts as a screen for a normal desktop.

The concept certainly looks cool but realistically when would you rather use your fingers for typing on a screen than a keyboard?


On a final note...
As far as a name, how about the Apple Touch?