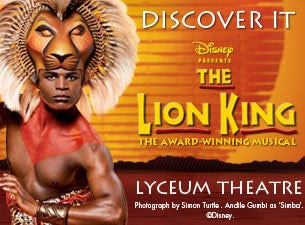 The view from where we were which was the Royal Circle, Row C to the left was very good as it was easy to look at just the animals but you could also focus on the actor's faces.

Opening scene:
The opening scene with the Circle of Life was incredible with the lady who plays Rafiki filling the theatre with her voice. In the audience, you really got the feeling of being involved as the characters came down the aisles towards the stage in some incredible costumes. Huge elephants came down, followed by several other animals. Throughout the play the aisles were used. This scene brought a tear to my eye as it was exactly how I imagined it. The atmosphere was amazing.

Storyline:
The story was well told and some scenes like Mufasa's death were told in ingenious ways. Turning a 70-odd minute film into a 2 hour 25 minute play is no mean feat. There were also a few scenes added which felt unnecessary as I had seen the film but which worked well. Having said that the time flew, including the extra 20 minute break.

Costumes:
All the costumes were stunning. The giraffes were incredible, the cheetah's, the hyeenas, the elephants, Timon and Pumbaa, etc. were all incredible! Zazu in particular was my favourite of the puppets. The masks fro the lions were stunning as well and all the scenery such as the grass was created in an ingenious yet non-distracting way. It was very possible for ignore all the actors and simply focus on the puppets and masks for the most part. When the masks would cause a nuisance to explaining the story actors put them down and spoke the lines in character. Timon's puppet was very advanced, as was Zazu though I felt the actor portraying Timon should have been in brown and not in green which stood out a bit.

Similarity with the film:
The play was very funny with the majority of the lines taken from the film itself, and with a few added adult innuendos. Having said that the audience was predominantly adults and kids were actually few and far between for such a child-aimed show. Shows the work Disney has managed to put into making the film and show appealing to all.

Songs from the first and second Lion King film's were used and were sung generally to a very high standard. Especially by the adults. Unfortunately the young Simba's voice was not up to par with the film and songs such as "I just can't wait to be king" felt a little lacking compared to the movie. Nala was slightly better. Yes, they are just kids. But it has to be said the film's versions were better.

Acting:
The stand-out actors for me were Rafiki and Zazu which both provided hilarious, believable performances. What a pair of astounding actors! Those who portrayed Timon and Pumba came in close second, followed by Nala. The choir was also fantastic and note perfect. Hearing many of the actors being British felt strange however with the exception of Zazu.

The set:
The set was very simple to the audience, but technically looked incredible with the raising and lowering of machinery constantly, though I felt it could have been more elaborate. Set changes were quick and efficient.

Conclusion:
4 out 5 stars
For the price we paid which was £62.50 per ticket we got what we expected I guess: the costumes were all there, the storyline was there. However, as a Disney fan, with Disney you always expect something to WOW you and unfortunately nothing was particularly astounding with the exception of the actors who portrayed Zazu and Rafiki. I have to say for the price and the fact it sells out every night at full price, I was disappointed but that may have been due to my exceptionally high expectations. Having said that I did enjoy the show while watching it: it was funny, brought a few tears to my eyes with the wonderful singing and atmosphere, it was well told BUT I guess I expected more

If you have to choose between The Lion King and Wicked, I would go and see Wicked.
disney lion king review reviews show theatre