- April 28, 2012
With the 20th Anniversary upon us it only seemed right to hop over for a quick trip to Disney and see some old workmates. I booked a hotel room at the explorers for £90 a night for 2 nights and used a Hotels.com reward credit bringing the price down to £96 for 2 nights for 2 people. I used 7300 avios points from tesco clubcard to get a free 2-park 1 day ticket and finally I got a Eurostar return ticket for £66 minus a £20 Eurostar reward, so it was £46. So essentially my trip ended up costing me about £100 plus spending money - cheapest trip ever, eh?

The day eventually came round and I made my way to St. Pancras. Before going through check in I went into M&S and get some crisps, a sandwich and a pasta dish. Then I went through check in, security and past the French border police. This all took maybe 3 minutes altogether.

I had not booked a direct Eurostar as the prices for that were closer to £150 and I'd love to not pay that much. So I booked an indirect Eurostar via Lille. This meant that the First train for me would be a Eurostar to Brussels (I'd hop off at Lille Europe) and then get a TGV to Marne la Vallée (Disney).

Without about half an hour left until the announcement of my train, I went to the cafe Nero inside and grabbed a hot chocolate and ate half of my M&S sandwich. A few minutes later we were boarding the Eurostar.

On board the indirect Eurostar it was actually more pleasant than the Disney one as there were less kids and there was no one setting next to me so I got to spread out onto two seats. An hour and a half later we were at Lille Europe.

There it was simply a case of getting of the train and going upstairs on the escalator. 15 minutes or so before the train was due to leave the platform number went up on the arrivals screen and then it was a case of validating your ticket in the ticket machines and going down to the platform. 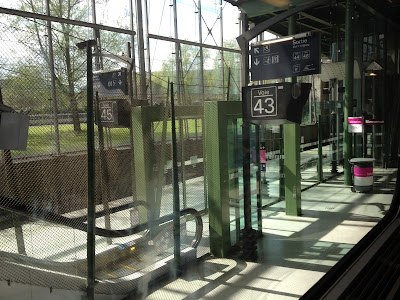 When you get downstairs onto the platform, take a look to the left and right of you and there should be a red and black screen telling you where to wait for your carriage as the trains from here to Disney are usually 2 trains joined together or a very long one with up to 20 carriages. 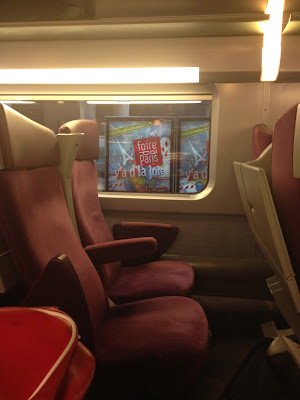 The TGVs are nice inside if you get a duplex one (two floors) and are upstairs then you get some great views out of your window. You might even be lucky enough to get a refurbed train which have some lovely seats even in second class. Such as the one pictured here.

They are comfortable and have fold out tables too. The above-head storage is much narrower than on British trains. This means that if you have a small suitcase you will need to leave this at the end of the carriage or the storage mid-carriage as it will not fit above your seats.

The TGVs also have a cafe bar onboard and toilets. They are also a member of RailTeam which means that if you miss a the TGV because the Eurostar was late or vice-versa then you will be put on the next one. It also means all announcements are made in French, German and English and staff at stations and on trains also speak all three languages. This is very useful for anyone who needs help but cant necessarily speak perfect french.

An hour and a half later we were at Marne La Vallee - Chessy station (note there are no announcements that this is the station for Disneyland so pay attention) arriving 8 minutes later than the scheduled time. It was a simple case of going up the escalators turning right and then I was in Disneyland. For anyone who uses the Disney Express baggage service then you will find this here in the station too. 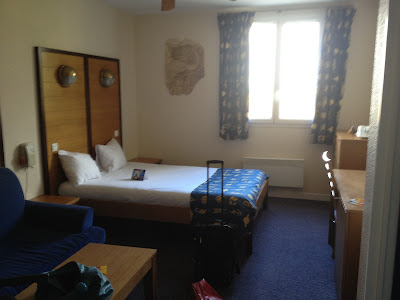 I went to meet Francesca and we both took the number 54 bus to the Explorers hotel which was the first stop. We checked in choosing the 8.30am breakfast slot. We then went up to the room to chill for a bit and I've got say I was very impressed with it.

There was a double bed and a sofa which opened up into a sofa bed which was a double as well. There was a small fridge inside the room which was a nice surprise as we could keep drinks and food fresh. There was also tea and coffee-making facilities, a phone, some shelves and a separate toilet and bathroom. Only foam was provided for bathing and hand washing.

I couldn't fault the hotel in any way, shape or form. The rooms were clean, the made up the sofa bed for us when we requested it, the maids also cleaned and tidied every day as well. The theming in the hotel was also decent as well with a slab on an elephant in our room and porthole mirrors and bedspreads. The staff were also very helpful at reception and in the restaurants. Perfect. 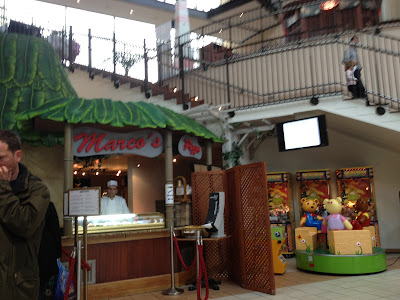 Sufficiently hungry we went downstairs and grabbed some pizzas from Marco's - Pizzas were 11 euros and chips were 4 euros. The pizzas came in under 15 minutes. While we were waiting we popped upstairs to the Disney store and explored.

There's an area to eat right opposite the pizza place and as it was late-afternoon it was empty. The pizzas were mediocre though we ended up eating them all. And the chips...

I then went to get a coke from the bar at the shocking price of 3.8e for a glass. There was a happy hour of 7-8PM where it was 2 for 1 drinks.

We went back to the room and watched the classic "Top 10 things to do at Disney" video on the TV screen in both french and english and then just stuck around and chatted. Then Francesca realised that she had forgotten her blackberry charger. I had a compatible charger but had no UK to EU plug as I'd forgotten it.

About 9PM we went over to the Disney village and went to Cafe Mickey to meet up with Katy who works full time at the Wild West Show. This was fun as we got to see the Disney characters although we didn't get any food as we'd just eaten and judging by the prices and the comments from the others, we were glad that we didn't. Fran has asked Katy to bring her blackberry charger but she had forgotten.

We left cafe mickey around 11PM in the hope of going through the stores in the Disney Village and finding a UK to EU plug adapter. We asked a member of staff and then got a bit of Disney magic as he said that they they didn't sell them but that he'd call to check with the hotel so he called the Explorers hotel and explained to us that we could get one from the reception there in exchange for a 30 euro deposit. This was a brilliant bit of customer service from a Cast Member - wish I'd got his name. On that note, throughout this whole trip there were so many Cast Members I wish that that I'd given positive feedback for. They were brilliant during this trip.

We then caught the last bus back from the Village to the Explorers which was at 11:45PM. We got the adaptor from the reception and the situation was just as explained by the Cast Member in the village. Off we went to bed ready for a very busy day at Disneyland.