- July 19, 2012
I don't usually do artist reviews, or album reviews but one of my uni mates is part of a band called "Chatfield" and I just had to let you know about them, especially as they have a big gig coming up. 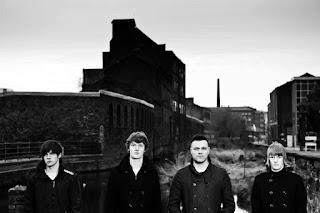 Chatfield is an Alternative Rock band from Sheffield which has been around since 2008, with the latest line-up being established from April last year.

They say they are influenced by The Foo Fighters, Oasis, The Stone Roses and The Script.

The band is made up of lead singer Chris Davis Smith (also plays the rhythm guitar), Callum Bagshaw on lead guitar, Stefan Rankine on bass guitar and Josh Obrien on the Drums (and backing vocals).

I'm glad I explored the bands Facebook page and really like the band's sound and music and am personally looking forward to seeing them perform in the future.

This month, on Saturday, July 28th they are supporting the Pigeon Detectives at Leeds Skyfest at 6pm. This is set to be a huge gig for the band and should be really exciting! Get a ticket and go!
artist chat field misc music