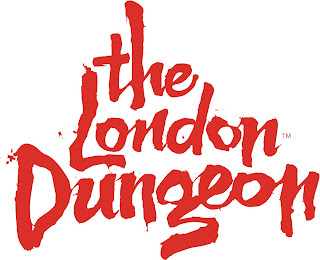 As part of my job as a tour guide I occasionally get invited to grand openings of attractions. If companies want me to recommend their attraction it helps if I've been to it.

This time we were invited to the grand re-opening of the London Dungeon. In case you hadn't heard the Dungeon was relocated from near London Bridge to near the London Eye and it just reopened this March, having been closed for two months.

We were led in in groups of about thirty and moved from scene to scene. There was a general tense atmosphere around but surprisingly there weren't very many jumpy moments at all, if any. The cheap scares that were achieved were done by loud noises activated by sensors and the group scaring each other.

In the dungeon you are moved from room to room, learning a bit (a very little bit) about history in a humorous way. In each scene you meet Londoners who will tell you, and show you, the past.

The Great Fire of London scene has been removed (something I think is key to London's history) but the story still flows well and it makes sense as to why you are meeting new characters. Along the way you'll meet a liftman, Guy Fawkes, Jack the Ripper, a judge, Sweeney Todd and Mrs Lovett, Henry VIII, experience the plague and much more. As for the claim that the scenes are "ALL new", the stories are pretty much the same - maybe they're classifying changing some of the dialogue as it being a new show. There are also some completely new scenes but I wouldn't call all of them new.

I asked one of the senior staff members at the attraction why the fire scene had been removed. She said that at the old dungeon they asked guests to rate the sections they went through on cards and the fire was consistently the lowest-rated by guests so it had to be cut.

The experience is interactive and audience members are picked at random to be tested on with torture instruments, demonstrate how to be hanged, locked up, and many more reasons. I was called up to the front of the group and then told to go away. I was also used in the final scene in demonstrating how to make stupid faces whilst being hanged.

The special effects within the attraction are very good and they really do like using water to squirt you wherever they can. Sweeney Todd in particular is very realistic to the point I had to lean forward to stop feeling the blades he was yielding. The lighting is well done and the timing is brilliant so that you never see the group in front or the group behind.

There are two rides. The first is a boat ride where you can either get wet...or very wet. If you want to get soaked sit at the back, if you think you're going to stay dry elsewhere you won't.  If you want to count it, the Sweeney Todd experience may also count as a ride, as may the mirror maze. The final ride is meant to be a hanging. You get on a drop ride and you drop a few times with some nooses in front of you. This was what I was dreading the most a I hate drop rides but it was only a very little drop and I actually quite enjoyed it. It's just strange looking down with there being no floor, staring into darkness. It was actually quite a fun hanging ;)

Overall, the attraction does prioritise entertainment over history. It's targeting young kids and for that age range it doesn't disappoint. It's also nowhere near as scary as they make it out to be in their adverts and nowhere near as intimidating as it looks on the outside.

You can get tickets to the London Dungeon at AttractionTix here.

The London Dungeon is one of my "32 Must Dos On Your Trip To London". Check out the others.
attraction london london dungeon londres new review sight the london dungeon trip report updated updated dungeon