- June 30, 2013
I, Blair, Kirsty and Rosie decided that we’d go to the Magic Kingdom today for the opening show. It was 100% worth it. It’s such a great, feel-good show and made me so proud to work at the Magic Kingdom - something to boost morale before my first full day of work tomorrow.


Despite everyone’s reluctance to walk quickly, we managed to do the rides I wanted to do straight away to minimise queues - Space Mountain, Splash Mountain and Big Thunder Mountain and all in less than an hour. We also went on the Tomorrowland Peoplemover again - I love this ride too much for a ride that does nothing more than tell you which is beneath you but it’s relaxing. We also rode Buzz Lightyear and I am pleased to announced that I beat Blair by over 300,000 points. I actually won a shooting game! We also saw Monsters Inc Laugh Floor which was actually quite good even if the audience participation was a bit cruel. 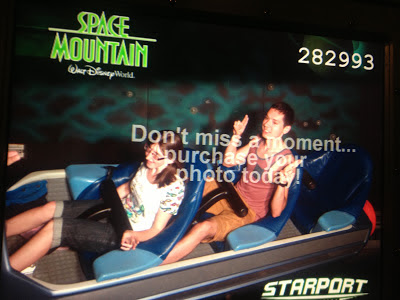 After, we visited Cast Connections and Property Control which sells broken, returned and damaged Disney merchandise. We walked through the most rain I have ever been in to get there and it was hugely disappointing with most of the items being a pile of tat. Blair described it in less family friendly words. Despite that, I did get a nice snow-globe reduced from $18 to $4. I didn’t even want a snowglobe but it was cheap, so I bought it!

We went back to Chatham on the bus and the sun was out again so we all went to the pool for a few hours which was fun though I’ll have to go back on a day when I can actually get a tan as it was starting to get cloudy. Rosie and Blair mocked me for not being able to do a handstand underwater...because that’s a skill most people have clearly...

After that we went to Publix for some supplies and then to Downtown Disney to meet Dan. I was hugely impressed with Downtown Disney. It’s great and so much better than the Disney Village area in Paris. This one is genuinely really cool and not just a row of 5 shops. It even has a volcano that erupts every so often. We ate at a chicken place that claimed it had the “best chicken in the world”. It didn’t. It was average at best. Despite that, it was the end of a great day. Tomorrow - actual work!