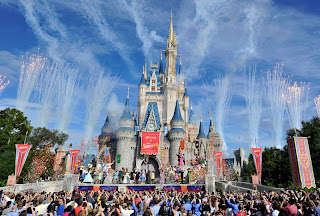 I had been scheduled to work 10 days in a row which I thought was a bit excessive so I gave my Monday shift away to a girl at work yesterday. My request was approved which means that I’ll now have Monday off - hooray!

Today was a 10-hour work day from 11:30 to 22:15 with a SIM (Safety in Motion) class scheduled in the middle. The class was about 45 minutes long and was introduced to reduce workplace injuries after Walt Disney himself found that many employees at the original Disneyland were experiencing pains from repetitive movements.

The bus today was 20 minutes late which isn’t ideal after a long day’s work and when they only come every half an hour. Buses at the drop off point are also not allowed to overtake each other so sometimes there’s 3 or 4 buses backed up and you have to wait for them to leave individually before you can get to and from work.

Work is much better now than last week now that I’ve got into the swing of things, and that I’m talking to all the other cast the breaks are more fun. It feels like I haven’t been to the parks as a guest in ages so I’ll have to do that when I get a day off. As a side note Monster’s University came out yesterday here and I’m dying to see it!

Day 21 - 23rd June 2013
It was an 8 hour shift today but it flew by. The guests were surprisingly nice and it was my first time working Extra Magic Hours (EMH) at MK. This means that from 11pm-1am the park is closed to regular guests and is open only for those staying at a Disney resort hotel, so we check room keys at the entry of every attraction. Surprisingly no one complained this it was unfair apart from one man who sounded disappointed as he said "aw that sucks". At the end of the day, as the coordinators say, the park was open till 11pm for 14 hours which is more than late enough anyway.

The big problem today was that I had to go to costuming for work and they didn't have my size of shorts, or the size below or the size below that. The end result was that I ended up wearing shorts that were 6 inches too small around the waist and I could barely breathe. The other option was to go 3 sizes too big and those would have fallen off. So, I'm not sure what's happening - have people taken all the shorts and are washing them at home themselves or is costuming being slow? I'm not sure, but I need shorts that fit me. I have one set at home which fit me so I'll have to check whether there are any others available before handing those ones in to be washed at costuming.