Walt Disney World clearly puts an incredible amount of effort into training its Cast Members. Before we are even allowed to do on-the-job training, there is a lot of classroom training - in total we will spend almost 2 out of 9 weeks we are here training and filling in paperwork.

Day 5 - 7th June - Traditions
I’d been looking forward to Traditions for months and the day had finally arrived. Traditions is a training class where the aim is to completely brainwash (I mean...teach) you with facts about the parks, Walt Disney’s legacy and more. The most important thing we are told is safety. This is the number one priority in everything Disney does. We are then taught about the 4 “keys” - Safety, Courtesy, Show and Efficiency and how these must be followed in this particularly order in everything we do as the cast.

I cant really tell you everything that is covered in the class as 1) I’m not allowed to and 2) It’d ruin the magic. I can tell you though that we got our Disney name-tags courtesy of a surprise visit from Mickey himself and we got to visit the Magic Kingdom for the first time! 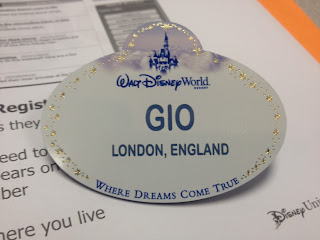 We went in through the utilidoors which is essentially a whole underground city and then they built the Magic Kingdom on top. It enables cast to get around the site quickly and therefore you’ll never see a Tomorrowland cast member in the Fantasyland area as we can walk from one area to the other underground. It's so cool! The downside is that all the waste from trash cans is also transported in huge overhead tubes in the utilidoors (this is called the AVAC system) and the smell down there isn’t the greatest.

Today, we also got our IDs which would allow us into the parks for free whenever we want! So, logically as soon as were done with Traditions me and Eilidh (my Paris buddy!) went over to Hollywood Studios for the last of the Star Wars Weekends and watched the Hyperspace Hoopla show which was hilarious and rode Star Tours (the 3D version here is so much better than the old one in Paris!). 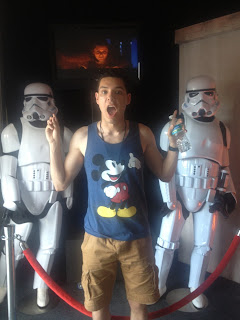 In the evening, it was time for the nighttime show “Celebrate the Magic” and the nightly “Wishes” fireworks to conclude our first in-park day!


Day 6 - 8th June - Magic Kingdom Park Orientation
The aim of today was essentially to have a complete guided tour of the park in the morning and in the afternoon we went to our land for more area-specific touring. By the end, the aim was to know the park inside and out. There were lots of cool facts and interesting anecdotes and we got to see the effort that goes into designing these parks. For example, the only area in the Magic Kingdom not to have BGM (Background Music) is the first aid area as turn-of-the-century music isn't necessarily something you want to hear when trying to recover from an illness.

As well as that we got our costumes (Disney terminology for uniform) to try on today and went to costuming. As I'm not allowed to take photos backstage, ABC News provides you with the following image to show you to size of the costuming department. Look at how many different sizes there are for the exact same costume and there's hundreds of costumes and accessories: 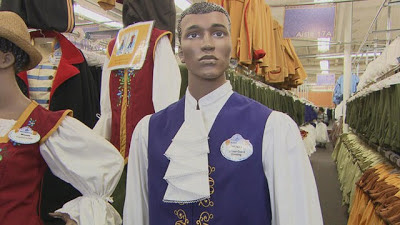 Note that that is not my costume but you can see from the background what it is like. Rows and rows of clothes with thousands of costume pieces in all different sizes.

To be honest it's not bad compared to some of the others and I get to wear shorts which is a godsend when its 35 degrees outside and 100% humidity. This costume I am told is due to be replaced when New Fantasyland has finished being built next summer as the theme of us being in a German village will no longer apply and there will be castle courtyard costumes instead.


Day 7 - 9th June - For our guests
So, back to work today with a training day called “For our guests” which was all about how to deal with guests with disabilities, what is and isn’t appropriate, health and safety, etc. This was all e-learning so was fairly boring as we sat in front of a computer for hours.


We also walked round Fantasyland and took a look at it in more detail and rode Peter Pan and experienced Enchanted Tales with Belle again. I can’t really complain with getting paid to do rides and skip the queues. This time the portal effect was working in Belle which it wasn't yesterday - if you’ve not seen it: a mirror in front of you turns into a door in front of your very eyes. It was great.

We stood at Fastpass distribution for about an hour which is my favourite position (it was funny to see seven of us cast members at Fastpass distribution, each with our own machine) and I did the greeter position for about 10 minutes which is where you welcome guests, hand out red FLIK cards to monitor wait times, greet guests and answer any questions. You definitely learn a lot more on the job than on a computer or from a manual.