It was definitely the calm before the storm yesterday. The park started to refuse guests entry and reached a phase 3 capacity closing today which meant that it was very, very busy. However, I was all for independence day because to me it meant one thing...free food day! I also got a free US flag pin which was nice. At the Chatham bus stop I got a free hot dog and at work I got a free Mickey ice-cream sandwich. Both were really nice. 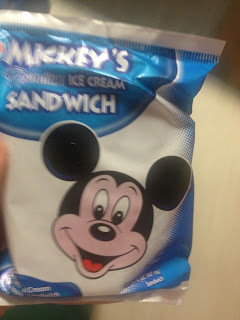 The crowd by the carousel in Fantasyland was huge for the fireworks and there was no way of getting through. This led to a lot of guests getting rude and asking to be let through the ropes into the firework zone. I understand it’s frustrating that they can’t move and get through but if as a guest you’re rude to me, I will not help you. One man and his wife thought they’d try and get through the ropes anyway - they didn’t. They started to become rude and therefore got no help.

At the mouseketeeria I asked the woman if everything was free as it was independence day, she said “I wish” and then when my order total came up I noticed there was a nice discount which was great. Ask and you shall receive.

It was busy as I say in the parks but it was nowhere near as busy as I would have expected it to be from the way people were talking about it. They should try getting on the tube at rush-hour over here or seeing the crowds at the Olympics and then come back and say that the park was crowded. Space Mountain did get up to a 160 minute wait but it wasn’t as bad as I thought it’d be personally.

I closed part of Philarmagic today too which was only I think the first or second time I’d done it since training.