Walt Disney World ICP - Day 33 - The forgotten name-tag... - 5th July 2013
Today I went for my haircut in the tunnels at the Magic Kingdom ($15 plus tip), used the cast showers and as I still had an hour to spare before my shift, I went to play in the parks. In my goal to do every attraction in the park, I rode the Walt Disney World Railroad. 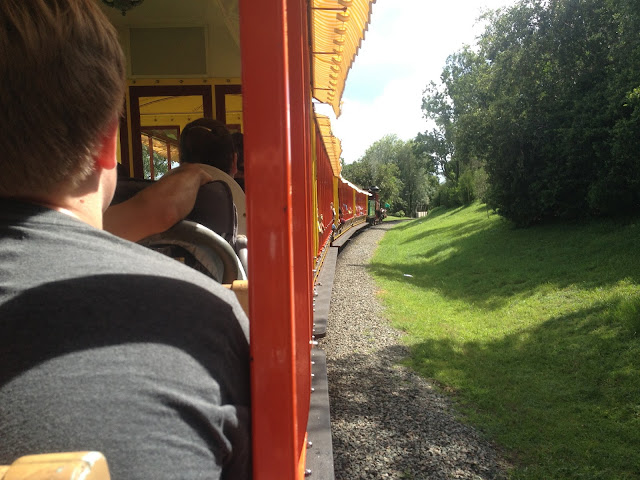 I caught the train from Frontierland and got on the second train even though there must have been about 80 or 100 people in front of me in line. They said there was a train every 4 minutes and the ride itself was actually really fun to see bits of the park I still hadn’t seen yet - the ride takes about 30 minutes to go around the park with most time spent at the stops.

I forgot my name-tag at work and as it is Disney policy that you are required to have one, I got a loan one. For today my name was “Jason” and I was from Dearborn, Michigan which I was told was just outside of Detroit. It might just have been because I had someone else’s name but it felt like more guests than usual were addressing me by my first name. The park today felt really quiet in comparison to yesterday and about 8 of us shamelessly stood in a line by the carousel and watched the fireworks - I thoroughly recommend watching the perimeter from near the carousel if you want a great 360 degree view.

Small World was down, as was Pooh and Little Mermaid so park hours which had already been extended from 11pm to midnight got further extended to 1am. 1am seems to be the standard park closing time now it feels.

A few more things I’ve noticed about the US...people literally will take a lift (elevator) up or down one floor instead of taking a flight of stairs, seriously...it takes longer by lift!

We were sharing guest stories and apparently when the cast are at peter pan load and ask “How many?” to find out how many people are in a party, one of the common answers is “All of us” which made me laugh.

Walt Disney World ICP - Day 34 - A magical day at work - 6th July 2013
Today was a short and sweet shift - 17:00 to 23:15 and we weren’t extended. The park once again seemed quiet. I was tasking for a while so blew bubbles for half an hour straight whilst on guest flow which was fun. I also got fastpass distribution twice which is still by far my favourite position.

The weirdest thing that happened was that Philharmagic went down - or 101 as we say. However, as greeter no-one informed me so for about half an hour I was admitting people saying it’d be a 10 minute wait not knowing that my attraction wasn’t actually working. This may have led to some disgruntled guests but most were understanding.

In an example of guest stupidity someone smoked whilst on Peter Pan’s Flight today and set off a fire alarm - really, couldn’t you wait 3 more minutes?

Apart from that little hitch, a nice day - where else do you get paid to blow bubbles?