- November 01, 2013
A couple of weeks ago I became aware of Bramley Baths and their swim-along cinema. The idea is very simple: you go into the swimming pool, there's a load of floats and you watch a film. I went to test it out.

Being close to Halloween, the Baths decided to put on their 'spooktacular' by screening "Ghostbusters" as the film of choice. Having not seen the film in several years, quite fancying a swim and wondering what the fuss was about I and a Jasmine set off to have a look. 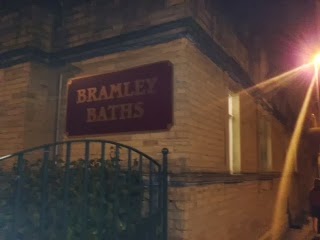 Arrival:
I won't lie. Jasmine and I were apprehensive about the idea. Being two people in their early twenties our initial fear was that we weren't really of the usual age group to be attending an event like this. "What is everyone going is really elderly?" "What if there's only families with little kids and we stand out like a sore thumb?" and most importantly "What if we are the only ones there?". These were just three of the questions running through our heads. 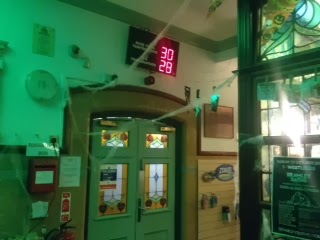 We arrived at the baths and apprehensively walked through the doors expecting to not find a soul but were pleasantly surprised to find a family in front of us. "At least we're not the only ones here". The decor took me by surprise as the Baths had spared no expense with cobwebs, costumes for the staff and even rolled out a red carpet. I'd booked the tickets in advance over the phone at the very reasonable price of a fiver each. Tickets can also be purchased on the night subject to availability or beforehand in person at the Baths - as the event seemed reasonably popular I would recommend booking in advance.

We picked up our tickets and emerged into the main swimming pool area which already had about twenty people in it and there was still a while to go before the film started. The lifeguards wore Ghostbusters costumes. After getting changed we were ready for what we had already deemed to be an interesting and unusual night.

Before getting in to the pool we were approached by one of the characters roaming around who asked if I'd like to audition to take on the new role of the receptionist. If I succeeded and passed the audition I could work for Ghostbusters. I had a go, being awarded a lollipop for my valiant efforts and told I'd start my new job as the receptionist on Monday at 8am. I'd work 70 hours a week and earn £2 an hour - what a deal!

Another member of staff told me he wanted to draw my attention to a very important message he had and then shone his flashlight at a sign saying "Bustin' makes me happy".

The experience:
Once the film started and the lights dimmed I was pleasantly surprised at how clear the projection was on the screen at the end of the pool but there was one thing that I couldn't get over while watching the film - the audio. Naturally, a swimming pool already has very echo-ey acoustics but when a sound system is added, the audio become almost unintelligible making it very hard to understand what was being said by characters. I found that when music was playing however it could be heard perfectly fine- my feeling is a film with more of a score and less talking would work better (Wall-E would be a perfect example).

Although the film itself is a classic, I'd forgotten that it's not (at least in my opinion) actually that great. With a very slow start and lacklustre performances, its only saving grace is the fantastic theme tune, which everyone in the pool sang along to throughout the film.

There were two ticket options available to purchase - non-swimming (balcony) and swimming. I would thoroughly recommend the swimming option to immerse yourself (no pun intended) in the experience. Admittedly after an hour it did start to get cold in the pool but dipping your legs in the warm water, or being in the pool itself, is such a relaxing way of enjoying a film.

There was a "tuck shop" upstairs where you could buy hot and cold drinks and even freshly made popcorn - all very reasonably priced and a great way to stay warm. When I went to the shop they were also looking for more volunteers to help with nights such as this one, as the place is now community run.

Overall impression:
I enjoyed the experience and the atmosphere was really nice. You could tell that the staff and volunteers really enjoyed working at the Baths and enjoying hosting these events. Would I personally come back? Possibly - although the event wasn't about the film (and swimming/floating around and watching a film at the same time is not as easy as it looks) it would have been nice to have understood what was happening a bit better. Would I recommend you experience the swim-along cinema? 100% yes. Go along - it's weird, it's surreal but it IS fun!