This series of blog posts analyses the difference between the three Disney resorts I've visited - Disneyland Paris, Walt Disney World in Florida, and Disneyland Resort in California. Come explore the similarities, differences and quirks in all three resorts.

In this series I'll analyse the parks in terms of their atmosphere, offerings, attractions, accommodation, resort size, entertainment, food, the magic and their cast members. As well as giving them all a score for each category. Enjoy!

Walt Disney World is the largest resort and naturally the atmosphere varies from place to place and park to park - but ultimately due to its size and the amount of time it takes to get off-property the resort is very good at keeping you in the "Disney bubble". Everywhere you go you'll see Mickey-shaped road signs, perfectly manicured lawns and Disney characters. It truly is an immersive atmosphere. The only thing I would say about Walt Disney World is that the Magic Kingdom seems the most "fake" - everything looks plastic which I didn't find at the other Disney park resorts.
Score: 4/5

Disneyland Resort has a much more quaint atmosphere to it with everything being very small compared to the the other two resorts, but I instantly liked it more than Disney World. Things in the parks are almost too close together and it's the opposite of Disney World - here it's very easy to leave the atmosphere behind and step into the real world.
Score: 4/5

With Disneyland Paris, just like Disneyland Resort, it is easy to walk a few steps away from the parks and leave the magic and enter reality again. Disneyland Park has a great atmosphere with the most beautiful decors out of all the parks, the most impressive Main Street and characters abound. It is also filled with tonnes of little details unique to it. Of the three resorts though it does overall have the worst atmosphere - it feels like the magic is missing in comparison to the others - it is still there, just not as much. Walt Disney Studios Park - let's not even talk about the lack of atmosphere there.
Score: 3/5

Walt Disney World has the widest offering with four theme parks - with EPCOT and Animal Kingdom containing some incredible unique attractions and themed environments. Where-else can you have a safari ride on Kilimanjaro Safaris, then get a bus and fly above California in Soarin', take a boat to Hollywood Studios and drop 13-stories in the Tower of Terror and finally finish off your night by watching Wishes fireworks in front of the castle. The resort has a wealth of experiences to be explored including two water parks, golf courses, the countless resort hotels and the unique experiences you can take part in on the guided tours. Let's not forget the fact you can go parasailing, take boats between resorts, go on carriage rides, sit on a beach, hire out a speedboat, visit Downtown Disney and much more at the resort too! Walt Disney World hands down beats the other resorts in terms of its offerings.
Score: 5/5 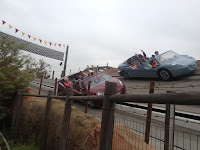 Disneyland Resort offers two theme parks with some incredible unique attractions such as Radiator Springs Racers and Indiana Jones Adventure. Outside the two theme parks, there's the extensive Downtown Disney Area which is actually my favourite one of these. There are no golf courses, no water parks, only three resort hotels and no incredible unique experiences.
Score: 3/5

Disneyland Paris has the least developed shopping district - Disney Village so instantly loses points for that. There are two theme parks, one of which still isn't a full day park, but the Disneyland Park has a lot to be explored. There is a golf course, an adventure climbing area, and seven well-themed resort hotels including a camp site!
Score: 3/5

Attractions:
Let's face it - people go to theme parks for the attractions, you wouldn't pay the $95 a day admittance price to go and eat in a restaurant or walk around in a themed environment. 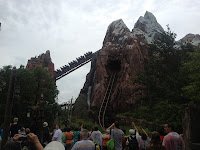 Walt Disney World has a huge variety of attractions, although some of them are clones of others at the Disneyland Resort - and inferior versions at that, eg. it's a small world. It does have tonnes of unique attractions though: Expedition Everest, Mickey's Philharmagic, all the interactive experiences in the parks, Mission:SPACE, Ellen's Energy Adventure and Test Track. It also has different versions of Splash, Big Thunder and Space Mountain.
The World Showcase in EPCOT is an incredible immersive series of attractions in themselves which are a testament to Disney's incredible theming. Magic Kingdom lacks in old-style classic dark rides though such as Snow White though it's nice to see the Carousel of Progress still in operation. Hollywood Studios feels like it lacks actual rides. Fastpass implementation, however, has not been done successfully in my opinion, with rides such as Toy Story Midway Mania having huge queues at Disney World because of the system. I would have given the resort higher score but the resort has not been innovating recently and some versions of attractions are vastly inferior such Pirates of the Caribbean.
Score: 4/5 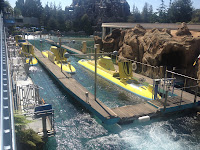 Disneyland Resort still has several very unique attractions such as The Matterhorn, Finding Nemo Submarine Voyage, Indiana Jone Adventure, California Screamin', Grizzly River Run, Mr. Toad's Wild Ride, Monster's Inc: Mike and Sulley to the Rescue and Radiator Springs Racers to name but a few. You can also actually go inside the castle though it is very small and cramped in there. Some attractions such as its a small world, Winnie the Pooh and Pirates of the Carribbean are also better than their Florida counterparts, though Space Mountain is a huge bore. The lack of Rock n Rollercoaster saddens me. Oh, and the water rides here really do get you wet.
Score: 4/5 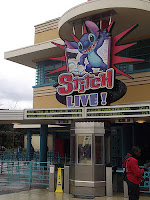 Disneyland Paris, being the newest resort hasn't had quite as much time to develop its attraction offerings. It, like the other parks, has some unique attractions of its own such as Crush's Coaster, RC Racer and Indiana Jones et le Temple du Peril (and in 2014 Ratatouille: The Ride), as well as some unique shows in the Studios park. It also has vastly superior versions of Phantom Manor, Big Thunder Mountain, Pirates of the Caribbean, Peter Pan's Flight and Space Mountain: Mission 2. The castle is beautiful and you can step right inside it - the dragon under it is a great unique feature too. However, lack of investment has meant some attractions like Star Tours, Studio Tram Tour, Art of Disney Animation and Rock n Rollercoaster seem tired, out of date and not as good as their US counterparts. It also lacks in rides such as Soarin', Test Track, Splash Mountain, The Many Adventures of Winnie the Pooh and Under the Sea. It's also to be noted that Disneyland Paris' rides are generally more extreme with more loops, tighter turns and higher speeds - the European audience demand more.
Score: 3.5/5

Agree? Disagree? Think I've missed things? Let me know in the comments below.