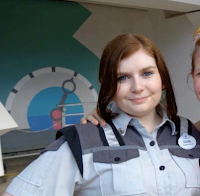 
What did your training consisting of?
My training consisted of a few different aspects, I had to attend Traditions as everyone does to learn about the company, then I had to attend Once Upon a Time... Is Now! which is the orientation for Magic Kingdom itself, then I had a day called For Our Guests, which included some online lessons and a tour of Tomorrowland. I then had 6 days of training on the attractions I would be working on, learning about each of the roles on each attraction, safety procedures, emergency procedures and general attraction information. I spent 3 days learning about Buzz Lightyear Spaceranger Spin, 1 day at Monsters Inc Laugh Floor and 1 day at Carousel of Progress, and then a recap day at all 3 attractions. The final day of training was my assessment day.

What did your day to day job consist of?
On a general day I would do a 6 hour shift, I would clock in and enter rotation (being assigned a position at an attraction) which at Buzz complex you can either be put into Buzz rotation or Monsters rotation (which is Monsters and Carousel Of Progress) then every 45 minutes you get rotated through the roles. You get a break every 2 hours. On a 6 hour shift I would get 2 paid 15 minute breaks. After breaks you would go to the computer and be re-deployed. You could be put back in the same rotation or in the other rotation so you always get changed around.

What did you enjoy most about your job?

Interacting with guests and changing roles every 45 minutes so you never got stuck in a bad position. Also getting the chance to watch Wishes if I was on greeter or strollers at 10pm.

What was the worst thing about your job?
If you got stuck on load all day at Buzz it could become a little tedious, especially if you end up at load 2 more than once in a shift, as the doors at buzz all have to be closed by hand so your arm gets a bit tired. You really look forward to rotation when you're there, but even that was fun sometimes.

What magical moments did you perform and what was your favourite?
We had a few magical moments at buzz, most involved giving out fast passes or taking people on the rides. Occasionally people would want to trade fast passes for other rides for fast passes for Buzz, so we would have to take the other fast passes off them. This was good if they were valid for later on for any of 3 Magic Kingdom Mountains (Splash, Big Thunder and Space), as you could then find people to give these to at the time on the fastpass so they could get straight onto the big rides with no wait.

What is your best memory overall?
Being in Tomorrowland I got to experience some cool things, like watching the Monsters show from the greenroom and seeing the magic behind it. Watching Wishes from the top of Astrorbiter where the view is amazing. And riding Space Mountain with the lights on, on my last night was an experience I won't forget.

What was the hardest thing about the program?
For me the hardest thing was that I wasn't old enough to drink in America as I was 20 at the time. I don't drink that often at home, but not being able to order a pretty cocktail at the Polynesian or being able to drink around the world at Epcot was strange. But other than that I didn't have any issues really, I loved my role and my work hours were pretty good and I didn't get homesick at all

What was the best thing about the program?
Being able to experience a Disney park for the first time, and visiting America for the first time. If it weren't for the program I never would have thought to go there on my own and experience it, or get the chance to travel to Los Angeles or New York either. I even went to Disneyland in California so went from never setting foot in a Disney Park to visiting 2 different parks in 3 months.

Any funny guest stories?
I don't think I really have any funny stories. We used to close Carousel of Progress at the end of normal park hours as it wasn't popular enough to keep open for Extra Magic Hours, so we closed it as usual, I was working on Buzz Greeter and a little boy came up to me with his family in tears with a guest recovery fast pass, so I asked him what was wrong, he was too upset to tell me, so his mother informed me that his favourite ride (carousel of progress) had been closed, she was obviously not annoyed at this (if anything she found the whole thing hilarious). I told him that he was going to love this ride (Buzz) even more and that he was going to help Buzz Lightyear defeat Zurg and become a Spaceranger. He wasn't impressed but rode the ride and seemed happy enough afterwards. The whole complex was just telling the story of the little boy who loved COP for the next few days. (Carousel of Progress isn't the most popular attraction...)

Is there anything you wish you knew beforehand?
How tired I would be after the first week, the schedule is so hectic, but that plus the jet lag is draining to say the least. However, the adrenalin gets you through it and I loved every second and made myself do something before or after inductions or work to get every last minute out of my summer.

Would you do the program again?
Yes, in a heartbeat. I'm applying for the CRP (Cultural Representative Program) in Spring 2014.
cast member disney world interview Walt disney world wdw