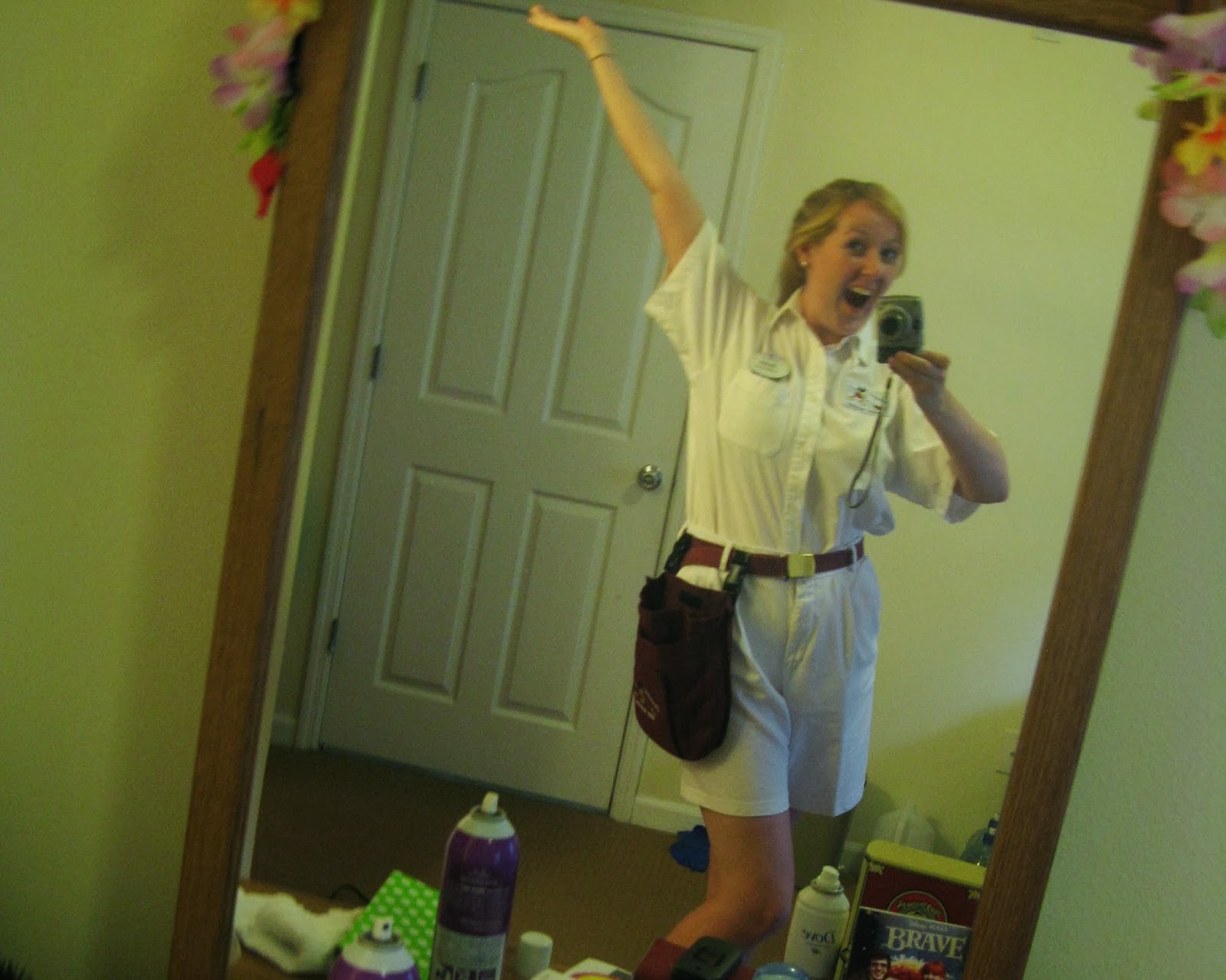 What did your training consisting of?
There was obviously a lot of emphasis on cleaning cause that is the main part of the job. A biiiig emphasis on the process of cleaning up blood and vomit which was a bit scary and intense but you got used to it. Telling us the chemicals we'd be using, showing us the trash cans of Disney (I have to admit, I am a huge loser and really love the different designs of the trash cans of Disney so I kind of enjoyed that bit). There was then a lot of talk about how to create magical moments for guests and how we should basically be walking information booths!

What did your day to day job consist of?
Keeping the area of the park I was assigned clean, doing trash runs, picking rubbish, talking to guests, giving them information and just being a helpful, cheery son-of-a-gun.

What did you enjoy most about your job?
I loved the freedom to roam about the parks and talk to guests. Like the fact you were actively encouraged and expected to interact with the guests was really nice. Custodial is such an underrated job, so many people give me a look of pity when I told them that was my role and it's ridiculous! They don't know what they're missing out on. yeah, cleaning up vomit isn't overly pleasant but the pros outweigh the cons.

What was the worst thing about your job?
Let's just say the women's toilet was not a particularly pleasant experience and I found a lot of unpleasant things in there. Also the heat was pretty hard to get used to since we're out and about all the time.

What magical moments did you perform and what was your favourite?

The only issue with Blizzard Beach was it was a bit more difficult to make magical moments. Most people aren't really up for chatting or don't speak much English and you miss out on things to help create magic, like the free buttons Disney give out for birthdays, anniversaries, etc. Nonetheless I took what moments I could! There was one time I found out it was a girl's birthday and I sang happy birthday to her using my pick as a guitar and I got a big group of people to join in. Then I swung by my pals at I.C. Expeditions and got her a sneaky wee sundae.

What is your best guest memory?
Because Blizzard Beach is a water park and there is a heeeell of a lot of lightning in Florida it closed quite often. When it did the lifeguards and slide ops entertained guests by playing quizzes and things. One time I kept slyly giving this kid the answers and everyone was like "it's you!" and I was like "nuh uh, I'm just sweeping..." so later on when the park opens the girl asked me to come on a slide with her as a thank you. I told her I couldn't but I walked up the stairs with her to the queue and she asked me about where I was from and I told her Scotland and then she asked about Merida and I told her she lived in the castle next door to mine and so on and so forth. Anyway, I saw her and her family leaving the park later and the parents came up to me and said she wouldn't stop going on about it and they really appreciated it. I honestly nearly cried it was so nice to have that recognition that you just don't get in your average day to day job. Apparently she wants to visit Scotland now cause she thinks we all live in castles! haha.

What is your best memory overall - whether guest or not?
I don't even know if I can pick a certain memory. It was pretty darn special getting to watch fireworks across all of Orlando from the top of Mount Gushmore (the mountain in Blizzard Beach) and that's also how I met one of my best friends. I also had the most amazing graduation day!

What have you learnt whilst working on the program / at Walt Disney World?
In hindsight, surprisingly I didn't learn that much. Potentially more so on the run up to it when I was silently freaking out (in a bad way) about going because I was scared it wouldn't live up to my expectations and I had to build up the confidence to make it an enjoyable experience. But I definitely became more confident in myself when I was over there. I also learnt a lot about America and Americans! haha. And I guess living with 4 girls from Hong Kong gave me an insight to their way of life too!

What was the hardest thing about the program? Leaving it...?
Nah, there were obviously difficult guests that made you want to tear you hair out but it's no different from any other job. Also the culture shock was pretty intense but I got used to it quickly enough. I just had to avoid saying worlds like "rubbish" cause that would get me laughed at!

What was the best thing about the program?
I just have no idea what to say. The friends I made, the adventures, having Walt Disney World on your doorstep to do with as you please, riding Haunted Mansion 10 times in one day, meeting the princesses whilst wearing a tiara? Also, not to be cheesy, but it was pretty special to be part of the magic and to have the ability to spread it.

Any funny guest stories?
If there were too many custodians on you basically spent your day picking litter on the stairs to the water slides which was my FAVOURITE job. There's pretty much no litter whatsoever up there so I spent my time just singing the rocky theme tune at guests who were out of breath on the stairs and egging them on. This one time I kept running into the same two guys who obviously picked up I was Scottish so they kept saying "we're trying Scotland, we're trying so hard" and every time I walked past them they'd yell "HEY SCOTLAND!!!". Also one time I got a group of people to do the macarena with me.

Is there anything you wish you knew beforehand?
I think when I first arrived there were definitely things I thought "ooh I should brought this or that" but it was never anything important. I do wish I'd realised how little time I had and that I'd done more of the things I really wanted to in my first month. I think when you first arrive you're spending so much time settling in that you forget 2 months really isn't that long. I missed a lot of what I wanted to do because of that.

Would you do the program again?
In the past, given how hard I had to work to get there I probably would have said yes in a heartbeat, but my very good friend Julia (a Glaswegian ICP at Hollywood Studios) pointed out it could never be the same and it wouldn't be as magical. And I think that really hit home. As someone who actually cannot reapply (since I'm no longer a student) that gives me a lot of comfort. In saying that I would definitely consider it if I had the money to go back (The ICP is expeeeeeensiiiiiiive).
blizzard beach cast member disney world interview Walt disney world water park wdw