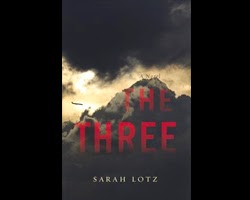 I was lucky enough to be provided with a review hardback copy of The Three, a novel by Sarah Lotz.

Sarah has co-written several other works - mainly thrillers - but this appears to be her first foray into her own work.

The Three follows the journey of four survivors from four plane crashes on the same day with the novel being centred around how the event had occurred and who or what was behind the incident. This was an incredible premise for a book especially as I read it at the time when the MH370 flight had recently gone missing. This essentially has a 'this could happen to me' factor which always piques my interest further.

With such a strong subject and several different story lines Lotz chose the use of first person perspective wisely allowing the reader to dip into different stories in short chapters instead of each plane's tale being told separately - this works well.

Furthermore, Lotz did a fantastic job of giving an insight as to how people might act if the events in this book were to unfold in reality - from claims of the paranormal to a religious coming all making appearances.

The book felt well-researched with technical details being given throughout, both technological and mechanical which added to the authenticity. The locations and colloquial regional language used by different characters also felt very real.

However, there are numerous flaws in the novel however that annoyingly ruin the experience. Although slow reveals can work, there is a limit to this - it is only 300 pages in to the novel that the storyline really begins to develop. There is a huge amount of focus on developing the characters but even then some seem two-dimensional. On this point, there are also an excessive number of characters to the point where I actually couldn't remember who was who.

The book is marketed as being a horror novel and although there are a few chilling moments, these are few and far between. The cover and the synopsis provide more promise than is ever delivered. Ultimately The Three creations high expectations throughout but fails to deliver.

SPOILER: The ending was incredibly frustrating, being an ambiguous situation that did not resolve the entire premise the book set out to achieve - a pet peeve of mine. This was the final nail in the coffin.