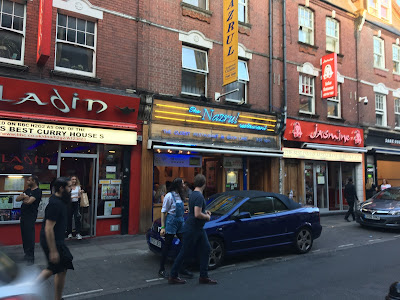 Brick Lane is a fashionable, up-and-coming destination in Central-East London, and the heart of the British Bangladeshi community. Many people call it Banglatown, and it is widely known for its curry houses.

The street was formerly known as Whitechapel Lane, however it got its new name - Brick Lane - from the manufacturing of brick and tile during the 15th century.

Brick Lane is filled with fashionable shops which are open daily, as well as an incredible amount of street art including works from Banksy and D*Face. It is also well-known for its nightlife scene.

Brick Lane Market is a popular destination on Sundays and specialises in second-hand goods, including clothes, furniture, books, and much more. Trading here takes place on Sundays from 10:00 to 17:00.
bangladeshi brick lane curry flea market free things to do indian market places to eat places to shop shopping shoreditch things to do whitechapel