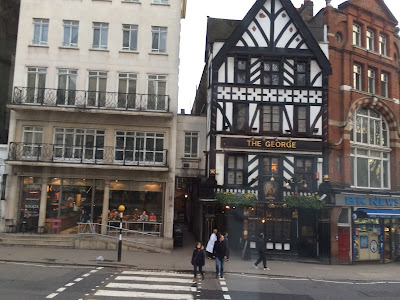 Fleet Street is named after the River Fleet which is a major underground river in London. Up until the 1980s, the street was famous for housing the national newspapers. Fleet Street is still a phrase used today when speaking about newspapers years after they have left the area.

Fleet Street has quite a few notable sights. Starting in the West you can enjoy the Royal Courts of Justice. Directly opposite the Courts, pop into Twinings (address: 216 Strand) – a tea merchant which has stood here for over 300 years – notice how the shops around this one now tower above it.

You can also see The Temple Bar Memorial monument here which stands proud with a dragon atop – it marks the location of Sir Christopher Wren’s previous Temple Bar entrance to the city, which has now been moved next to nearby St. Paul’s Cathedral.

Moving further east along Fleet Street, just a few doors down, look for a tiny alleyway called “Hen and Chicken Court”, it is here The Demon Barber of Fleet Street – Sweeney Todd – slashed his victims, according to the popular urban legend.

Fleet Street is very well known for its pubs. Our favourite, for atmosphere alone is Ye Olde Cheshire Cheese, which was rebuilt in 1667 – take the staircase downstairs and you will notice how much smaller people were back then: the headroom on the stairs is non-existant.

St. Bride’s Church is another favourite spot of ours and is located just before you reach the end of Fleet Street going east. The unusual spire of this church is said to have been the inspiration for today’s multi-tier wedding cake when a local baker used the spire as a template.

By the time you reach the end of Fleet Street you will have a stunning view of nearby St Paul’s Cathedral.