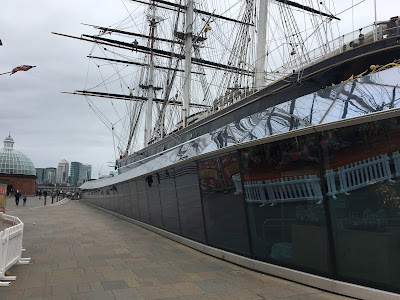 Greenwich is one of the London’s gems that we still think is underappreciated to this day. Despite being just minutes away from central London on the tube, it still has very much of a village feel to it, with plenty of green space and has fantastic sightlines of central London.

Although we have listed Greenwich here as one place, there are many things to do in the area. Highlights in this area include the National Maritime Museum, Cutty Sark, Queen’s House and Old Royal Observatory.

The National Maritime Museum is the largest museum of its kind in the world with 10 free galleries to explore. Admission is free.

The Cutty Sark is the world’s only surviving tea clipper and dates from the 19th century. You can step aboard the ship and learn all about its history, as well as the restoration work to make it viewable by the public today. Admission is £12.15 per adult, £6.30 per child and £10.35 for concessions.

“The Queen’s House” is today used as an art gallery, and dates from the 17th century.
The Meridian Line & Historical Royal Observatory at the top of the hill provide spectacular views of the city and Canary Wharf.

Here you can take a photo with the prime meridian that divides the world’s eastern and western hemisphere and is the basis of GMT (Greenwich Mean Time). Admission is £9.50 for adults, £5 for children, and £7.50 for concessions. The Astronomy Centre at the Royal Observatory nearby is free admission and contains interactive exhibitions related to the stars and planets.

Finally, the Old Royal Navy College contains beautiful grounds, as well as the Greenwich Visitor Centre, the stunning Painted Hall (which has been described as ‘the Sistine Chapel of the UK’) and the beautifully quaint Chapel of St Peter and St Paul.
All the museums listed here open from 10:00 to 17:00 daily, with last admission at 16:15 or 16:30; they are all closed 24th to 26th December.

Greenwich Royal Park surrounds many of the area’s museums and is a great place to sunbathe, relax or have a picnic during the warmer months.

One of the more picturesque ways of getting to Greenwich is via a river cruise from central London – allow 45 minutes for this journey.

Another faster and more economical way of getting to Greenwich is via the Docklands Light Railway (DLR), which provides interesting views along the way – you can get the DLR at Bank or Tower Gateway in central London. The journey takes about 25 minutes.