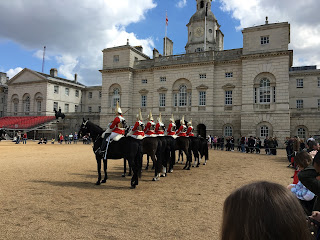 Horse Guards Parade is a parade ground situated off Whitehall. You can see the Horse Guards on duty every day from 10:00 to 16:00 here, guarding one of the official entrances to Buckingham Palace.

At 16:00 every day there is the inspection and dismount ceremony, that visitors can watch free of charge; simply turn up. The Changing of the Queen’s Life Guard also takes place daily on Horse Guards Parade at 11:00am (10:00am on Sundays).

This parade ground also hosts “Trooping the Colours”, an annual ceremony that is conducted on the official birthday of the monarch in June. The Beating Retreat is another ceremony held here on two successive evenings in June. It was formerly the venue of major tournaments that were conducted during the reign of Henry VIII. It was once also the headquarters of the British Army and home to the Duke of Wellington. Currently it houses the General Officer commanding the district of London in the British Army.

The Horse Guard Parade grounds are free to visit, but the museum is paid entry. Opening dates and prices listed are for the museum. Inside, visitors can appreciate the work that goes into being the Queen’s mounted bodyguard with a unique behind the scenes look. A multi-language self-guided multimedia tour is offered to each guest at the museum and brings the exhibits to life, as you learn about this regiment’s interesting past.

Get tickets to the museum here.