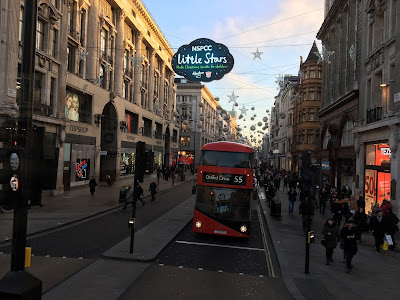 Oxford Street is Europe’s busiest shopping street (with over half a million visitors daily), and is home to over 300 different stores. Oxford Street contains all sizes of shop, including many large flagship department stores such as John Lewis, House of Fraser, and Marks and Spencer.

Oxford Street is perhaps most notable for Selfridge’s, located to the Western end of the road. Selfridge’s, founded in 1909, is the second largest department store in London, after Harrods in Knightsbridge. It was founded by Harry Gordon Selfridge, an American who coined the phrase ‘the customer is always right’.

Also on Oxford Street, you will find brands ranging from United Colors of Benetton to Nike Town and Primark. Unique to Oxford Street, is the fact that most of the shops are affordable, big high-street names.

Measuring 1.2 miles (just under 2km) in length, you can spend an entire day on this one road alone, visiting each and every shop.

Hours listed in this section are general shopping hours, with many large shops staying open later until 21:00 or 22:00 from Monday to Saturday. Due to Sunday trading laws, large shops can only open for six hours on Sundays. Smaller shops on Oxford Street may still be open later than 18:00 on Sundays.