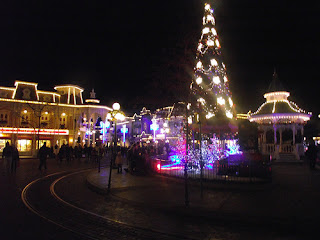 I've finally fixed the dates now on these blog posts. But for now "on y va."

This was my first day off in what has felt like AGES. I took the opportunity to sleep in till 11am and just as I woke up. Francesca, Stefano, Jamie and Alwyn too were all in the kitchen and we all had beans on toast with an egg too. Mmmmm. Thanks guys!

I went to give Jamie his ID as he had forgotten it, then I hopped on the RER to val d'europe and waited for my mum, dad and brother which was nice. We went to Auchan to buy food and then checked in to the Adagio hotel which is much nicer than the reviews online made it sound. Nice having a kitchen and being able to cook food as opposed to always eating processed food out.

Went to Disney village and there was a little stage where they got everyone dancing. We wandered around the shops too.

I went to buy some batteries for the camera which my parents had brought and got a huge (sarcasm alert) 10% off these batteries. About 7 euros for 8 which I guess wasn't too bad [although they were Kodak and not duracell and therefore pretty crap].

I then went to meet up with Eilidh and Andrew in Planet Hollywood and over the next hour Andrew became just *a little bit* tipsy. Eilidh then ran off to get the 10pm bus. Me and Andrew stayed and went to Annette's Diner. The queue was long and with only 40 mins left till the bus left at this point, it was off to the every trusty imaginations building.

We went back home and with the flat empty I took the opportunity to sleep. The WWS (wild west show) crew arrived around 1am when it was then CHRISTMAS!!