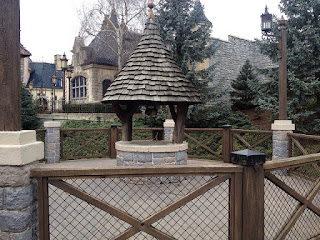 Well, if you read my blog post from yesterday you will remember me saying I had set an alarm for work. Or so I thought. In fact I either didn't OR slept straight through it but considering my roommate wasn't woken up by it, it looks like I forgot.

So I was meant to be up at 6h40 to be ready to start work at 8h30. Unfortunately for me, I woke up looked at my phone and it was 13h14, I didn't believe this so checked my watch and other phone and they all said that it was past 13h00. Way to make a last minute impression, eh?

Mortified by the idea that I was already 5 hours late into my last ever shift (thankfully 10 hours and not 8), I called the team leader's mobile - with the 60 cents of credit I had left. And said that "Bonjour c'est moi. Je suis tres tres tres tres tres desole, je n'ai pas entendu mon alarme. Donc, qu'est-ce-que je fais?" The team leader was surprisingly very understanding and said something in french which I didn't quite get, to which I said "d'accord" and she said "a toute!" Surely that meant I had to come in? I called to confirm what was said and to ask what to do as it's my last day as well, she said to be in asap and ready to work. I said that I'd be there at 14h30.

After a mad rush, I finally clocked in at 14h27, found a team leader who also didn't shout at me and went on my way to work. People were surprised to see me, as I assume they thought I wouldn't have woken up. TBH, they found it just as hilarious as I did. But I was suffering from utter exhaustion (Read: first ever hangover) despite having slept a decent amount of hours. [Side note: Never drinking alcohol again]

I only did about 30-40 minutes of work then was sent for lunch and when I got back I was told that I didn't have a right to lunch as I worked for less than 6 hours but I needed something to eat and it really did help get through the day. I saw Paul from the party last night at Small World after lunch, he said work called him at 11 to be in if he could. It's hilarious that he made it in and I didn't!

The next two hours were work then the attraction closed, we did the closing of it which involved me standing by the rope at the entrance of the mini-land saying "C'est ferme" "We're closed" "Encerrado" etc for about 45 mins and being asked "Why?" - a question I'd love to know the answer to too. I assume it's because with the cameras we see nothing at night, I said to the guests "it's the way it has always been but we'll be open tomorrow at 10am and the rest of the park is open until 11pm and then after the fireworks till 1am." I saw Paul again and wanted to say "Bye" as I don't think he realised it was the last time I'd see him! Oh well...until next time I work there.

After the final guests were let out I had about 20 minutes of sitting around in the break room talking to people. I went to sign out of work at 18h10 as planned and then went next door to admin to get my paperwork done - an envelope where half of my ID was cut up into which I get is fair enough.

But then came the bit that really really hurt me - my nametag. One of the team leaders said that she never lets ANYONE keep them and therefore I had to give it in. To add insult to injury I went back to my locker after being changed to get it as I thought I couldn't possibly forget it after being so late for work. Next time I know, leave it at home!!

The worst part was seeing my nametag being throw into a draw with hundreds of others, as if it were nothing. It really hurt me as it was the one thing I really wanted to be able to keep and make a collection of them. But she seemed pretty adamant on keeping them and judging by the pile asking wouldn't have done too much [I regretted not asking for the nametag immediately]. I guess it gives me a reason to go back as my 20th Anniversary one will be forgotten at home on my last day. Quel Dommage.

Half my ID was handed back on my lanyard and I kept UK pin in my pocket. I bid my farewells to the team and it was off to the bus stop and home. I savoured what could have been my last ever bus ride on the Pluto Rapid to Imaginations. I also realised that by now I'd lost that other half of my ID and the UK pin, but had kept the envelope with the important half.

I went to costuming, got changed and emptied my locker. Handed in my shoes. Got my envelope stamped, put it into the mailbox and left. As I walked out of backstage through the turnstiles to the real world I had a tear in my eye, and even now thinking about it I still do. I loved the experience so much, it was a shame it was tarnished by not being able to keep my name tag. I walked through the exit reading the sign to cast members saying "Au revoir et À bientôt." Never had a phrase seemed more appropriate in my life.

It's not the end though. There's more to come in my blog post of my Final day!
disneyland paris DLPCM