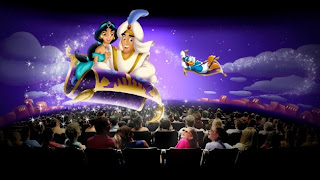 So today was the first full day that Disney let me loose without an “Earning my ears” tag and the trainers are right, as soon as you have a nametag people expect you to know the answer to absolutely everything, and not just everything in Disney World. They expect you to knew everything about everything. I’ll try and post some of the most specific questions I’ve been asked here on the blog over the next few weeks.

I don’t know whether it was the heat, or lack of food, or what but it was an absolutely shattering day. It was only 6 hours long, but I think the lack of a lunch or dinner really made me exhausted as we don’t get a half an hour break unless we work for more than 6 hours and the two 15 minute breaks that we do get are just not long enough to eat.

To give you an idea of a typical work day, I need to explain this: You come to work and clock in on a computer called the CDS (Cast Deployment System), you can clock in up to 15 minutes before your shift starts. When it is officially time for the start of the shift you type your ID number into the computer and click “Get assignment”. A job will display on screen - this can either be a rotation bump, a task or a break. You also get a print out.

In attractions you should never be doing the same thing for more than 45 minutes, you are constantly “in rotation” for safety reasons so you remain alert. A rotation is the order that people perform tasks in. So, if you clock in it may say for example:

It will always have your name first, so in this case I will go to the Fastpass greeter position, Shawn is at that position and will go to the theatre. When he gets there John which is at the Theatre goes to strollers and Mike returns to CDS to get a new assignment.

A task is where the slip says for example “Gio, sweep the queue line for 15 minutes” and you do that for 15 minutes and then return for a new assignment. A break is exactly which you think it is, you either go to break yourself or you take over someone’s position and they go to have their break. Hopefully that helps. It’s a simple system, but when it was first explained to me I didn’t understand it, by using it you understand it much better.

Anyway, essentially CDS runs our lives. We have no idea what we’ll be doing all day - no idea what times our lunch breaks are, what we’re doing next. Having said this though it is a very smart system, it will make sure everyone has a break and a lunch reasonably on time, it tells people to stop doing a certain task if it no longer needed. For example, if there is no need for 2 people to be sorting strollers, it will reduce it to one. Most importantly for Disney I suspect, it also knows exactly where everyone is at all times which means that our coordinators or managers can see exactly what we’ve been doing. It’s a very smart system, but at Disneyland Paris a pen and paper did much the same though the spontaneity here can be fun.

One of the tasks that CDS gave me today was to “check whether any fellow cast member needs a restroom or water break” - incredible, but useful.
Usually about 15-25 minutes before the end of your shift you get bumped out (so you go back to the break room) and then you can clock out 12 minutes before the end of your shift as that is the walk time - the time it is estimated to take me to get from my work location to outside Magic Kingdom property. Bare in mind I have to walk down into the utilidoors, walk through them and catch a bus to get back out of the park.

Today was a bit depressing as I was in the Philarmagic lobby and I could hear the Wishes fireworks being launched from the top of the Philhar building. And as soon as it was over I was sent outside to rearrange strollers. Strollers is actually one of my favourite jobs as you get to talk to a lot of guests and at night the heat was more manageable. Strollers in the heat I imagine to be hellish.

We have a flat inspection next Monday where they are inspecting for cleanliness. We’re not going to pass if we leave it in its current state so we’ll be cleaning on the weekend in order to pass.