I contemplated not going, but with the US school holidays starting in a couple of weeks I knew this would be the only chance to do the parks while they were empty.

We got to Universal at about 9:20am and I picked up my annual pass from the will call booth. Then it was through the gates and into Islands of Adventure.

One word - WOW. I know Disney’s theming is great but the entrance to this park is incredible. It wasn’t anything like I’d been expecting and I found that consistently the whole park looked incredible visually.


The first ride of the day, and my first ever ride in Florida was The Amazing Adventures of Spiderman. It was absolutely incredible. Everything in the ride just worked so well: the 3D was great, the cars were incredible, the sound, the visuals, everything - and it was a walk-on!! It absolutely blew my mind that an attraction with screens instead of physical objects could be so good. It was an absolutely game-changer of an attraction when it opened over a decade ago and it still stands its ground just as well today!

Naturally, we all went to the Wizarding World of Harry Potter next and rode the flagship ride: Harry Potter and the Forbidden Journey. Once again, WOW is the only way to sum up this ride. I have never experienced anything like it before - it was a step up from Spiderman in that you were taking flawlessly from scene to scene on an incredible ride vehicle that really does make you feel like you’re flying! I loved it so much that I rode it twice in a row - the queue is great too, but I didn’t stop and wait around to look at it in detail as I’m sure I’ll get to do that during future visits when the wait in longer. Today, however, it was a walk-on both times - no doubt due to the tropical storm that raged outside. Two days later I saw online that it was 150 minute wait. Did we choose a great day to go to the parks or what?!

Admittedly, after the second ride in a row I did feel a bit queasy and light headed, probably because of all the screens messing up my brain so I only went on it twice. Next it was time to record the memories in print - I bought a Universal Photo Connect card for $53. This allows me to get unlimited ride photos for the entire duration of my annual pass. The photos are only digital but if I want them printed out I can go to Walmart and do that for 10 cents each so it’s not an issue. And at $29 for a printed photo, the Universal Photo Service is a great deal.

Whilst I and Dan were riding Forbidden Journey for a second time, the others went to ride Dragon Challenge but later found that it was closed due to the rain, so they went to get some butterbeers. The verdict: the non-frozen one is way too sweet and it’s too big for one person. A few sips were more than enough. I’ve not tried the frozen one yet though.

A few complaints with Universal at this point: the Team Members are SO RUDE. The way they treat their visitors is disgusting. They told some of the UK ICPs they couldn’t sit down in the restaurant with their butterbeers because it was for food only and shouted at them, despite the fact that they had just spent $4 on what is essentially a juice. The ICPs ignored them, and rightly so. Then when we tried to join them a team member very rudely told us we couldn’t come in and blocked our path because we hadn’t bought anything yet - maybe if they had let us in we would have bought something! This all happened despite the fact that there were only maybe 10 people inside the restaurant with dozens of free seats so it wasn’t like there limited space.

And here comes my main concern with Universal - safety. This seem to have no regards for safety at all when compared to Disney. For example, the surfaces they have used on bridges are extremely slippery, especially in flip-flops - at Animal kingdom this isn’t a problem nor is it at any of the other Disney theme parks because they put non-skid strips on the floor. At Disney, if it rains they allow shops and restaurants to be used as rain shelter - not here. It’s stand in the rain or crowd under a small awning! Finally, the shops in the WWoHP are way too small. Now, I understand this was because J. K. Rowling said this had to be the case in order for them to get the license, but as theme park designers they had to know this wasn’t going to work - if it felt packed in the shops when Forbidden journey was a walk-on then what about when the land is at full capacity. I dread to think.

Next we went to see the Poseidon’s Fury show - it was alright. The actor was great and over-the-top excited, but it wasn’t anything earth shattering. The water tunnel effect was really cool though.

With a few attractions done and the rain and wind picking up we decided we should go over to the Universal Studios park to take a look around. Whilst there, we rode the Simpsons ride which was great, even if I did get a bit of whiplash. The new Simpsons area looks great and it’s incredible how quickly they are building it.


I also was really excited for The Mummy rollercoaster but it was down which was a shame, we checked again later and it was the same story. Despicable Me had cute characters but ultimately was an example of a bad use of 3D with vehicles in front of a static screen which bumped around - this one was also very harsh and rough, so I wasn’t a fan of it at all. “Disaster: A motion picture starring you” was actually alright once you were on the ride but all the pre-show was unnecessary and was about five times longer than the ride itself - Universal really need to drop the idea of you going into a working TV studio and just follow the theme of guests riding the movies. Men in Black: Alien Attack was fun, even if I did lose abysmally as I always do on these shooting-type rides - it’s a good example of a really well themed and fun shooting-type ride. E.T. Adventure was pretty fun and you get to ride in bicycles which was really cool.

We also took the single rider queue for Transformers: The Ride which was in technical rehearsals. All was going well and then we were about five minutes from the front and it broke down and we decided to leave.

By the middle of the day queues were getting long with Rip Ride Rockit reaching over 90 minutes so we left knowing we could easily come back another day. 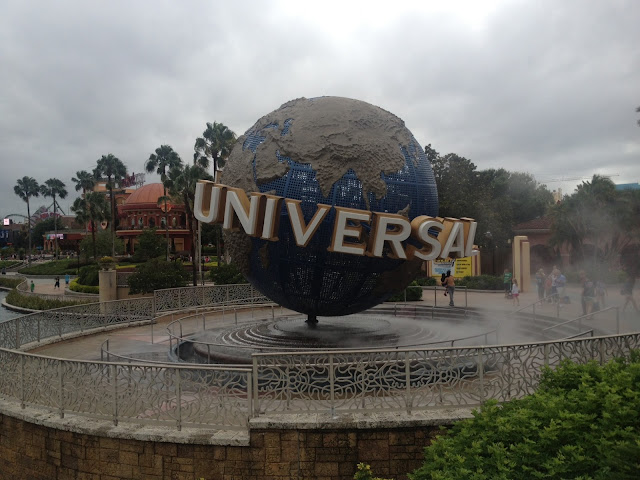