- August 23, 2013
We were up bright and early at 7am and got the bus at 8:10am for the opening show at the Magic Kingdom. When we arrived at the Magic Kingdom at 8:35 the turnstiles weren’t working so we were allowed in and one of my complimentary days didn’t get used which was great. As a Cast Member I get 6 free entry days on my program for up to 3 guests but my first day wasn’t used so if my parents want they can still go in another 6 times!

We watched the opening show at 8:45am and I could see that everyone was enjoying themselves by their smiles - even my Dad and brother!

We started off the day with Space Mountain for myself and my brother whilst my parents went on the PeopleMover. We grabbed a Fastpass for Splash Mountain and went for breakfast at Starbucks. Peter Pan was next and luckily my friend Tori was working so we got on through the disabled access lane and skipped the entire queue. This was followed by Pooh and the Barnstormer which my dad rode which surprised me - he was clearly scared. Dumbo was next, followed by Under the Sea and then it was time to use our Splash Mountain fastpass. Splash was down, so we went on the Haunted Mansion, got a Big Thunder fastpass and had lunch.

We then rode the Flying Carpets and Pirates of the Caribbean which everyone agreed was rubbish compared to the Parisian version. Pirates had the longest queue of the day at 30 minutes long. Then it was time to use the fastpasses for both the Frontierland mountains and we watched the parade. It was 3:15pm and we had done most of the park! The plan had worked. We left the park as everyone else was tired and chilled at the hotel for a few hours.

We had dinner at Tony’s and as we were on the way out of the hotel we saw my Canadian friend Marie Pier who I’d said a final goodbye to the day before - what were the chances?! We got the bus to the Magic Kingdom, did a tour of the park on the Walt Disney World Railroad and went for dinner at Tony’s. 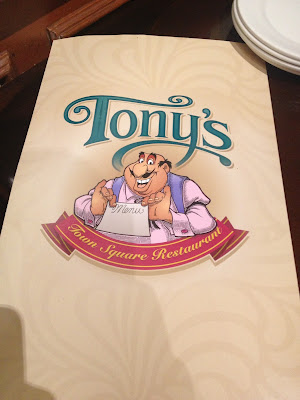 I can’t say I can recommend the food there - we were thoroughly disappointed.

Next we watched the 9PM electrical parade where a really rude PAC Cast Member kept shouting at everyone to move, instead of using her manners. She was by far the worst Cast Member I have ever encountered. It was then a night of action as we watched Celebrate the Magic, then Wishes. We rode Buzz Lightyear, watched the Carousel of Progress and finished off the night with the last ride on the Tomorrowland Speedway - an action packed day!