- August 23, 2013
It was time to visit Hollywood Studios this morning with the family and I managed to ride Toy Story which everyone enjoyed. I and my brother went on Rock N Rollercoaster, we all went to see the Indiana Jones show, we saw the full Backlot tour show, and did a few other bits and bobs.


I went over to the Magic Kingdom for work and allowed plenty of time to get there. As I was so early it was time for some shopping. One of the staples I buy every time I go to Disneyland Paris is a calendar and I’ve had Disney parks calendars on my wall for the last two years. I was in luck here as I found something I had never seen before - a 16-month Walt Disney World calendar! It covers September 2013 to December 2014 so that’s next year’s calendar covered. I was genuinely a lot more excited than I should’ve been but I was really pleased to have bought it.

As I walked up Main Street I caught the finale of the Dream Along with Mickey show but the characters had to leave a bit before the end due to the thunder so they just set off all the fireworks and let the song play till the end which was weird to see having seen the real finale.

As it was my last day of work, my goal was to create as much magic as possible. I spent a good half an hour tasking by blowing bubbles with a little girl dressed as Tinkerbell who said she’d rather blow bubbles than watch the fireworks. Her mum said that was fine and she’d let her do whatever made her happy - it really is true, the most simple things are what make kids happy, not these lavish experiences and rides - sometimes something as simple as blowing bubbles can make a kid’s day. Her mum got great photos, I was having fun and the girl was loving life.

When Wishes came on I was in the greeter position at Philhar so it looked like I was not going to be able to see the fireworks as I was under the attraction’s entrance. So, I asked Patricia to swap with me so I could do strollers - this meant that I got a really good view of Wishes of course and I and Marly went into the crowd for our last ever viewing of the fireworks as she was leaving today too. Tears were in my eyes but I refrained from crying as Marly told me not to. We went our separate ways to continue the night and I never got to say goodbye to Marly - she was a really cool girl and a great friend. Marly did say she didn’t do goodbyes and she stuck to her word!

Throughout the night as people left it was goodbye after goodbye. I initially thought I wouldn’t mind the goodbyes but they were actually really sad, but I assured everyone if they ever came to London they’d have a place to stay. So hopefully it will be more of a “See ya real soon!” than a goodbye. I closed the Philhar theatre today which was a fitting way of ending my time here and it was a sad moment when the guests handed me the glasses as they left after the last show.

At Track Talk (when we review the day as a group at the end of the night) one of the coordinators mentioned it was my last day so I had a round of applause which nearly got me all emotional again - even if most of my friends I had made had left the week earlier those who were still there I was still really close to and it was a heart-touching moment. The manager did a little congratulations speech for me, asked what I was doing after the program and how long I had left in school and said she hoped to see me back one day. We all rushed to CDS to clock out and Mickey appeared on the screen for the very last time to “Thank you for helping Make the Magic.” 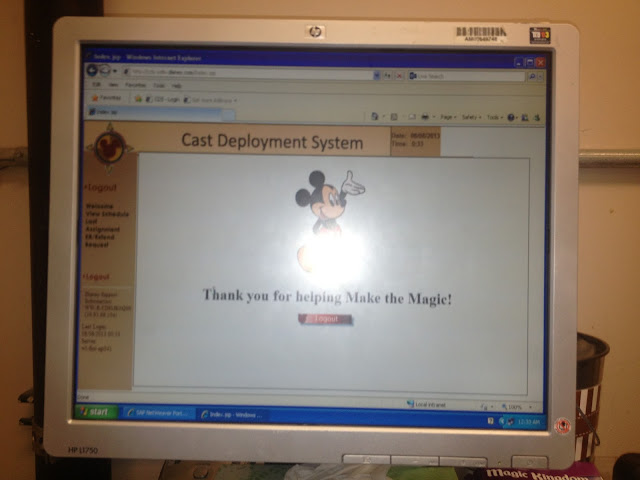