- August 22, 2013
31st July
Today was our graduation ceremony when we all got to dress up and celebrate completing our program. I went over with Dan to Chatham square field where the event was being held. We got a wristband on the way in which would later allow us to get free food. First though, we went over to collect our certificates of completion and our memory box that Disney provides, it’s where we can store all the little mementos of our time working at Disney and is a great souvenir.

Graduation was great as it was a chance to see people I hadn’t seen in weeks or even months! I got some photos with loads of my friends with Donald and Daisy. We also got another photo with Goofy in his graduation gear and Pluto too! At that moment I realised I’d completed my bucket list goal of getting photos with all the fab 5 characters which was great! We could have met Mickey in his graduation attire but the queue was over two hours long!

We got food next which consisted of chicken, a burger, salad and a hotdog which was delicious, as well as iced tea!

Finally, I met up with all my Philharmagic crew and we all got photos with the UK flag, the US flag and the Mexican flag which was really fun and it was nice to all have a photo together in something other than in our work uniform for once!

At work, today was also a lot of people’s last day with Ali, Argentina and Ana Victoria all leaving today. I swapped with Ana Victoria so she could see the fireworks on her last day and I took her position. It was also the last day that the carousel operated before going down for 3 weeks for refurbishment so we all got two final rides on the carousel before saying goodbye to it for the summer. After work we all went to Ale house - no ale was consumed but it was a fun evening none-the-less. Even one of our coordinators came.


1st August
Today was day 9 of 9 of work in a row, and to round it off Disney had me working from 11:00 to 23:45. I put in for an ER (early release) and thought it wouldn't be granted. Eventually around 17:00 I had resigned to thinking that it wouldn't be accepted. After my 6pm break I logged back in to CDS and noticed that today's hours had dropped dramatically. My early release request had been accepted by my manager and I was out at 18:45 - 5 hours earlier than scheduled and I could meet up with my family who were arriving today.

I texted my parents and looked online and found out that they were 2 hours delayed in Charlotte. That was after a lengthy 4 hour layover anyway so it wasn't ideal.

I also said bye to quite a few of my American friends today whilst at work as they had come especially to visit me - my housemate Kevin, and Courtney, Sarah and Katie. It was sad as I'd never see them again.

To fill time before my parents arrived, I ventured onto the Carousel of Progress and then went on the Peoplemover. Whilst in the queue I looked back and saw that my friend Marie-Pier was there. Yesterday was meant to be the final goodbye, but it was nice seeing her again. It was her last day in the parks!

We rode the Peoplemover and the friend she was with went to meet some other people, so I and Marie went to get some food. Well, I went to get some food because Marie had just eaten at Be Our Guest restaurant! We then rode Peter Pan and of course skipped the line. I still have never queued for that ride. Or even used a fastpass. It's been priority entrance all the way - friends in high (flying) places, huh?

We went to see the electrical parade next and then split for Wishes and Celebrate the Magic. Her friends were right by the castle at the front but I knew that wasn’t a very good view. We bid our final farewells. 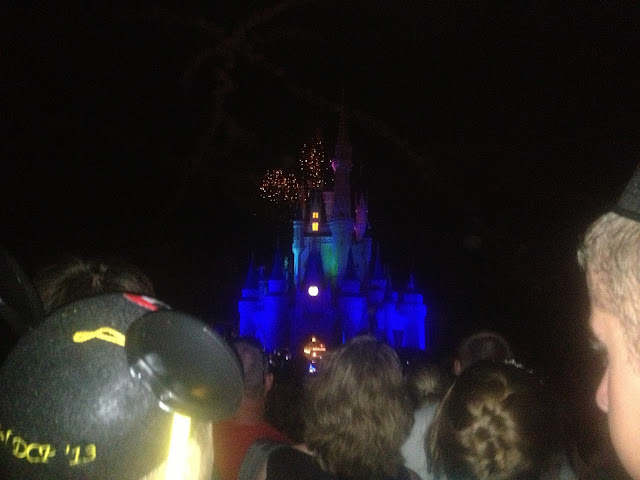 I met up with Kevin and the others and watched Celebrate the Magic and Wishes. Blair joined us too for the fireworks even though he doesn't like Magic Kingdom apparently. At the end, all the Americans burst out into tears, with me and Blair looking on awkwardly. We got some very teary photos - they’d been here since January and it was their last time watching Wishes! Sadly I have to say that Wishes has lost it's charm for me after having watched it daily about 50 times now.

I split from them and had an emotional goodbye and promised Courtney we would see each other when I'm over in LA as she'll be working there next on the Disneyland college program in a few weeks. Wow! From one Disney program to another.

I got the guest bus over to All Star Music and waited...and waited for my parents. I explored the shop in detail and started looking through my photos on my camera to kill time. Eventually a Disney Magical Express bus pulled up and off stepped my family. It was surreal seeing them after 2 months half way across the world, but I was very happy to see them.

At check-in there was some sort of hitch as the lady said "ah ha" and then left. She came back with the offer of moving us to Pop Century as it was a newer hotel and as a thank you as I was a cast member. To be honest, I think they were just out of rooms but we were happy to take the offer as it was in fact a newer hotel.

To be fair the front desk Cast Member was great: she called a cab for us which took us directly over to Pop Century. It was complimentary and we were given a sheet which essentially acted as a voucher for the cab driver.

We pulled up to Pop a few minutes later and explained the situation and were checked in quickly. It turns out the upgrade was worth it: our room is located close to pool and lobby which is great but not so close that we’d hear the noise - awesome!

The room isn't huge but it's adequate and most importantly - it's clean! It's so much nicer than the horrible apartments we live in as Cast.

We settled in and noticed the fridge had been disabled so we made a note to let them know tomorrow morning. We also bought a couple of refillable resort mugs too. Time to take them to Magic Kingdom for the first time tomorrow.