This year I participated in a charity hitchhike, called Jailbreak, with my housemate Rosanna. You join us here in part 2 of the adventure. So far along the journey we'd manged to get a free train ride to Manchester Airport from Leeds, failed at getting flights, got a train back to Manchester Picadilly, failed at getting a coach, got another coach to London, got a hotel, fundraised almost £100 in just a few hours AND booked flights to Nice, France. To read about all of that, take a look at Part 1. Now...back to the action.

So, we booked our flight for 7:40am, which meant getting up at 3:45am. It was now already 3am and by the time I got to sleep I had only had about half an hour of actual rest.

So Tuesday 1st April we got up at 3:45, got ready, checked out and walked to Victoria, arriving at 4:35am. Here we charmed our way onto the Gatwick Express for free, which was a necessity as we were going to play the whole game by the rules.

At Gatwick Airport we boarded our British Airways flight which was due to leave at around 7:40. It was really foggy and we ended up leaving about 30 minutes late. I hadn't flown BA for a while and it was surprisingly nice. Especially considering only £10 out of the £45 we had paid actually went to BA, with the rest being fees and taxes. 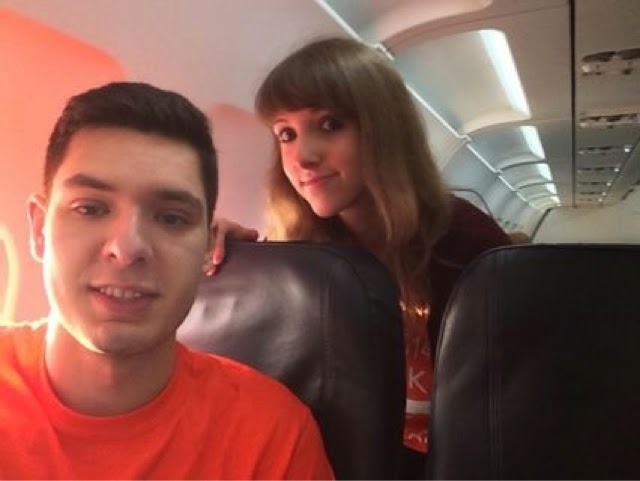 We touched down in Nice, France at around 11:20am local time and then the real work started. Luckily we both spoke French so at least that was a positive. After a quick bite to eat, we decided we'd try and hitchhike: we tried by the airport slip road, moved to another location (all whilst holding a sign saying "L'autostop"), then we tried another location where my theory was that s people would be forced to stop and read the sign as it was by traffic lights. After only about 10 minutes there (yes, we got bored easily) we moved down to a much busier location. To our credit it was very windy (not that you can tell by this very sunny photo). 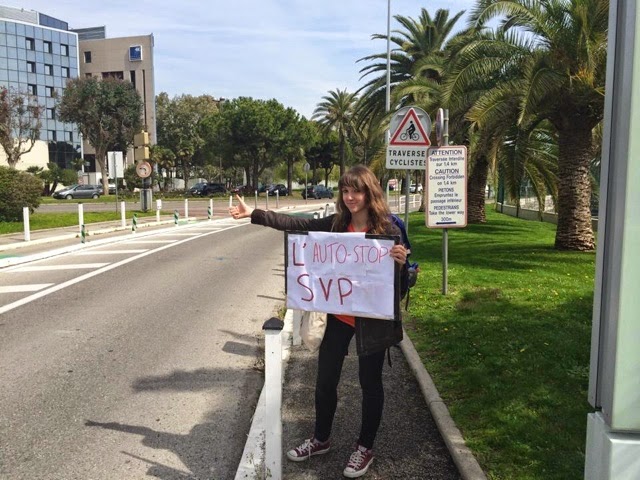 During all this time, only one person stopped and offered us a ride but he was going towards Cannes which was in the opposite direction to where we wanted to head (might I add that this man who stopped was by the traffic lights so my theory didn't completely fail). We now wanted to go to either Italy or the centre of Nice - to be honest, we weren't fussed which. We just wanted to get out of this airport location.

We weren't great at hitchhiking and after being at our final hitchhiking spot for about 15 minutes a man in a parked car asked us where we were going, we said the centre of town and he said we could just get a bus. We explained that we couldn't spend anything on transport so he kindly gave us €3 to get the bus into town. It was so nice of him - I dread to think how much longer we might have waited there for a lift. He really made the rest of this trip possible.

The bus journey took about 20 minutes and it was only now that I realised how warm it was in Nice compared to London. After some quick googling, we found that the town had a train station. We hopped off the bus and walked to the train station (I am trying to imagine how impossible this trip would have been without Google and the internet on my phone). 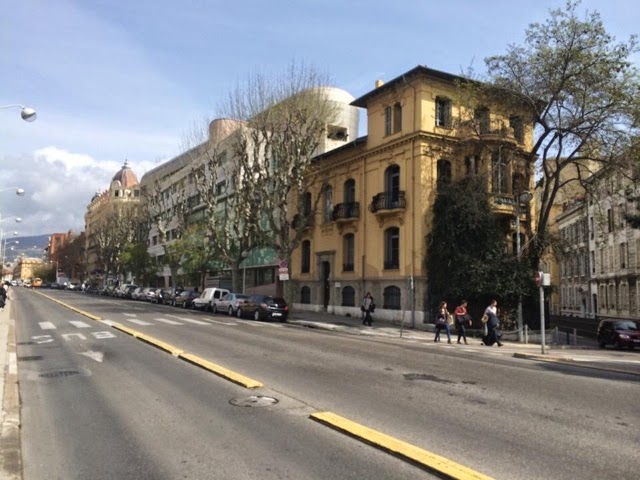 At the train station we tried to get the ticket office to donate a ticket, they couldn't but explained that we could try our luck with the train guards themselves. We charmed our way past the ticket barrier men (this is the first I had seen this anywhere in Europe) and got onto the platform. I talked to the platform train dispatcher and asked him where the guard usually is on a train in France (hooray for me being fluent in French); he said it varied and we'd have to try and simply look out for them. The train arrived and we jogged up and down the platform to find the train guard and couldn't see him or her. We looked back and the dispatcher had asked the guard to wait so we ran to the train door and explain the situation. The guard seemed skeptical at our idea but she said that we could get on and if the train police came on she knew of nothing. This seemed fine to us. We'd spend all of about an hour and a half in Nice in total, and only about 20 minutes of that in the city centre.

An hour and a half later we were in Ventimiglia in Italy, having travelling past some beautiful countryside and even through Monaco. 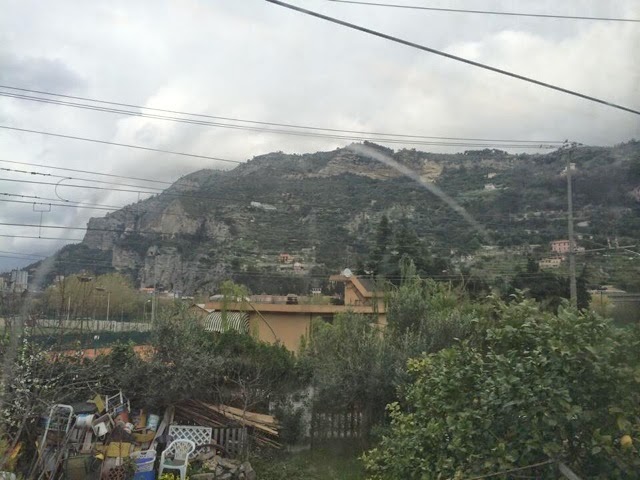 We arrived in Ventimiglia, Italy and spoke to the guard that was just about to leave for Genoa (having looked at timetables on my phone I knew this was the furthest we could possibly get). He said he couldn't let us on but said we should try the next one. The next train came along an hour later (we explored the town a little bit during this time) and we spoke to the conductor who spoke very little English and said no but he would check with someone. He brought over a lady who worked at the station, and who also spoke some French (hallelujah). She explained to us that we wouldn't be allowed onto InterCity trains for free (even though we'd just done that), as the "ticket police" get on. She said that we'd need to try our luck on the regional trains. She was firm, but very helpful. The lady even gave us the route we'd need to take (train to Savona, change, train to Genoa) and the time that the next train left Ventimiglia. It wasn't the result we wanted but it was hugely helpful.

The time came round for the regional train and the conductor let us on after some explaining. This was a slow train taking the scenic route but we didn't mind as we were going further into Italy. And towards Rome and Venice for after jailbreak. The scenery en route was stunning and despite my expectations of the regional trains being run down (like many in the UK, I'm looking at you Northern Rail), these were very comfortable (and also very empty). 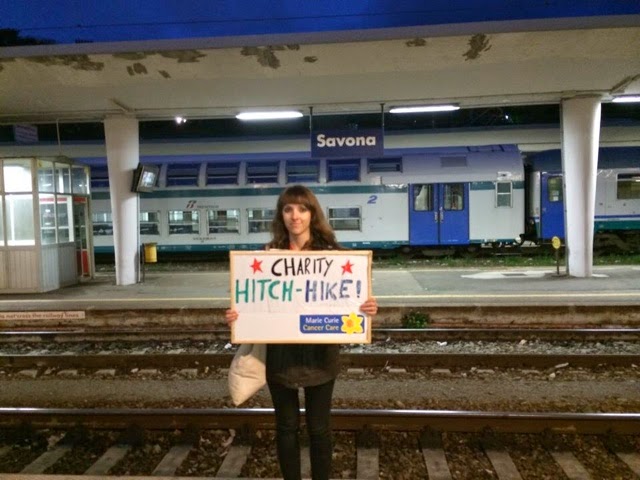 Two hours later we were in Savona and figured out the time of the final train to Genoa. We asked the train guard who didn't speak much English or French. As I began the spiel, he gestured us onto the train with the face of "I can't be bothered to deal with this today, just get on". It was incredible and once again it was an incredibly comfortable train (probably the best of the day). We made it to Genoa (or Genova in Italian and French) with an hour to spare. 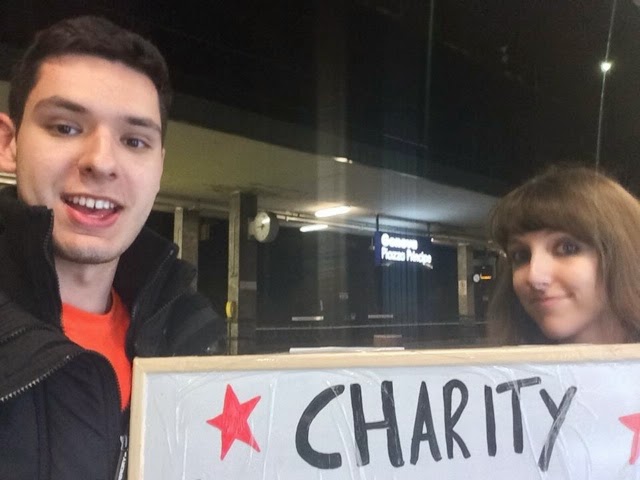 On the train, we found a hostel we liked and after arriving in Genoa we started walking towards it. It was now dark and we could really do with a bed. We arrived and rang the doorbell and couldn't find a way in and no one answered - good job we hadn't prebooked it! We started walking towards another hostel but along the way I found something online called the mini hotel. It was £45\€55 for the room including a private bathroom. Excellent. We got there and took the room without having a look at it (not wise). We were shattered. 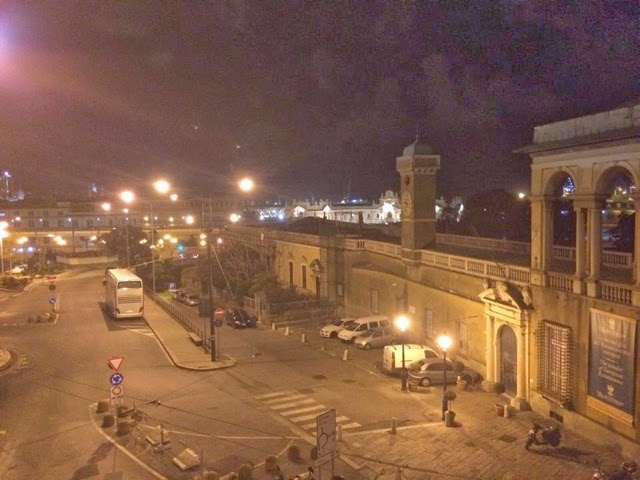 We got lucky: the room was amazing and I got a king-sized bed. The bathroom was huge and it was just lovely. Especially for the price. Then it all sank in: We'd arrived in a hotel room in the middle of Italy, spent no money of our own getting there, and we still had time to spare - it had been a hugely successful jailbreak (we ended up coming 4th out of 27 teams) and we were delighted, but also exhausted. I fell asleep whilst Rosanna was unpacking - I was that tired. I had only got about 4 hours sleep in the last 48 hours and really needed it.