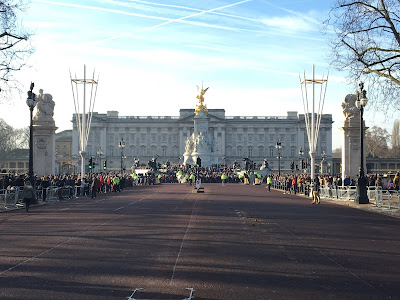 What time does the Changing of the Guard ceremony start and what is it?
The ‘Changing the Guard’ ceremony (sometimes referred as the 'Changing of the Guard')is one of the main attractions of the palace where you can see the royal guards marching to the palace to replace another regiment, accompanied by a band. The guard change ceremony happens every day from April to the end of July, and every other day during the rest of the year – check ahead to confirm the exact dates, especially around Christmas and New Year. The ceremony reaches its height at around 11:00am at Buckingham Palace, but you want to be there at least 45 minutes before for a good spot.

Furthermore, during the Summer, the nineteen State Rooms of the palace are available to visit, as well as the gardens in a self-guided tour. A visit to the State Rooms will last about two hours total once you are inside. In 2017, the State Rooms are open to visitors from 22nd July to 1st October inclusive. The State Rooms tour is one of our favourite things to do in all of London. Buy tickets for the State Rooms tour with afternoon tea at AttractionTix here.
buckingham palace changing of the guard changing the guard free london London guide state rooms tickets tour