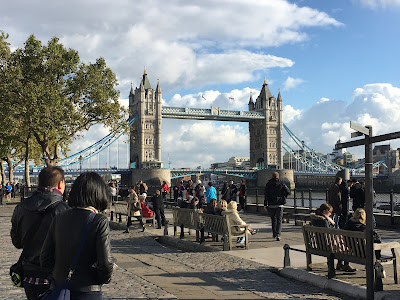 There are a few notable bridges on the river Thames that you may wish to explore. Tower Bridge is likely to be at the top of your list, however, as it is undoubtedly the most famous of them all and a true symbol of London.

Unfortunately, despite the bridge’s popularity, it is often incorrectly called London Bridge by tourists, which is actually the next bridge down the river.

The bridge itself was only unveiled in 1894, and took eight years to build. It was the result of a public competition and Horace Jones (who was an architect) came up with the winning design.

The design allowed foot passengers to cross at all times whilst allowing ships with large masts through. The way this worked was by the road bridge bascules lifting up, temporarily stopping traffic, to allow the ship to pass. Pedestrians would climb up the towers on either end, walk across the walkway at the top and come back down the other side.

Nowadays, the bridge still does lift up in this same way about 1000 times per year. You can check the Tower Bridge website to see opening times scheduled well into the future. Today, the process is very quick and pedestrians no longer use the walkways at the top to cross – these are now part of the Tower Bridge Exhibition.

The best place to get photos of the bridge when the bascules are lifted up is from London Bridge which runs parallel, or by the walls of the Tower of London closest to the Thames.

The Tower Bridge Exhibition (paid entry) allows you access inside the towers, as well as the pedestrian walkway across the top and even the engine rooms underneath. 2014 saw the addition of a new glass floor to certain parts of the walkways meaning that, if you choose to, you can look straight down at the traffic below.

This attraction is well worth a visit and covers both technological advances and the history of the bridge itself, as well as the river Thames.

Fun Fact: The stone cladding on the outside of the bridge’s structure is used to make it appear older than it actually is and to enable it to blend with the Tower of London’s 900-year-old walls. The structural support columns are actually made of steel.