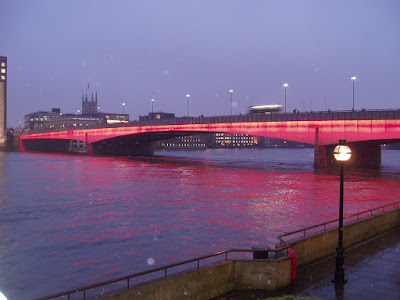 Up until the opening of Westminster Bridge in the 1860s, this was the only bridge to cross the river in central London. As such, it has gained somewhat of a mythical status, with several variations of the bridge having existed since the romans settled 2000 years ago.

The bridge is not to be confused with the most famous Tower Bridge.

From timber bridges, to stone and now a steel and concrete structure, this bridge has always been a vital crossing for the city.

The current bridge dates from 1974 and is a shadow of its former self - previously when the river was three times wider at this point, the bridge span was much larger. At the northern end of the bridge is The Monument to the Great Fire of London, with The Shard positioned on the other end.

The bridge has even inspired a nursery rhyme – “London Bridge is Falling Down”. It is thought the song comes from the Viking attack in the early 11th century when the bridge was destroyed.

Today, London Bridge is a fantastic place to get perfectly framed photos looking down the river towards HMS Belfast and Tower Bridge, and connects the City of London with Southwark.